Defender of the Cosmos

To protect the City of Townsville.

Blisstina "Bliss" Francesca Francia Mariam Alicia Utonium is the older sister of The Powerpuff Girls and the first known living creation of Mojo Jojo, appearing in the 2016 reboot of the series. She debuted in Power of Four as the fourth Powerpuff Girl.

She was voiced by Olivia Olson, who also voice as Marceline from Adventure Time and Vanessa Doofenshmirtz from Phineas and Ferb.

Bliss has dark tan skin a purple dress and purple eyes similar to Bunny. Unlike the other Powerpuff girls, she is a teenager, having much wider hips and longer legs. Blisstina has long neon light blue hair, with brighter blue highlights, with a darker blue outline. She wears a pastel blue headband with a pink heart adorn upon it.

Bliss is the same delightful bundle of joy as the other three girls. However, she doesn't quite meet the same standards of the "perfect little girl". Bliss has emotional instability, where if she feels to strongly about something, whether it be positive or negative, she will lose control of her feelings and powers and cause harm and destruction to people and things around her. Deep down, Bliss is a nice girl and she finds herself rather horrified with who she becomes in this melodramatic state, and she tries her darndest to avoid it. With the help of her younger sisters, however, she is able to do just that and become the crime-fighting hero she's always dreamed of being. 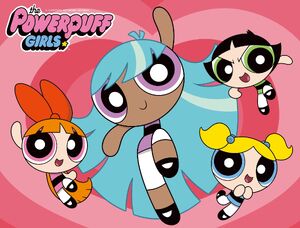 Bliss with her younger sisters Blossom Bubbles and Buttercup. 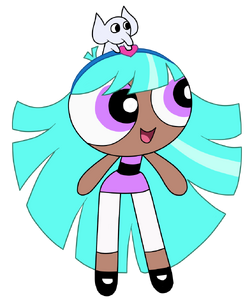 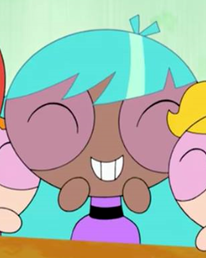 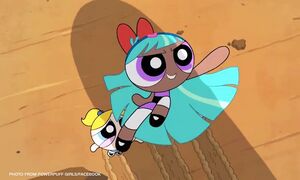