Blitzcrank, also known as The Great Steam Golem, is a playable champion in the MOBA game League of Legends. Created by the Zaunite inventor Viktor, Blitzcrank was the first of their kind, designed to protect Zaun's citizens and dispose of harmful waste. Blitzcrank has since evolved past their original programming and wanders the undercity to find new ways to serve and protect.

Blitzcrank was released on September 2, 2009, and is most commonly played as a support.

They are voiced by Duncan Watt, who also voiced Rammus in the same game.

Zaun is a place where both magic and science have gone awry, and the unchecked nature of experimentation has taken its toll. However, Zaun's lenient restrictions allow their researchers and inventors the leeway to push the bounds of science at an accelerated rate, for better or worse.

It was under these conditions that a team of doctoral Viktor students from Zaun's College of Techmaturgy made a breakthrough in the field of intelligent steam automation. Their creation, the steam golem Blitzcrank, was developed to exercise judgment on-the-fly in order to assist with Zaun's hazardous waste reclamation process, since often the conditions did not allow for human supervision. However, he soon began exhibiting unforeseen behaviors.

Over time, the scientists were able to identify a demonstrated learning process, and Blitzcrank fast became a celebrity. As is sadly often the case though, credit for the golem's creation was scooped up by another - Professor Stanwick Pididly - though most now know the truth. In the wake of the ensuing legal maelstrom, it became evident that neither party truly had the steam golem's best interests at heart, and Blitzcrank humbly petitioned for personal autonomy.

Backed by overwhelming support from the public, it took the liberal Council of Zaun only a few weeks to declare Blitzcrank a fully-independent, sentient entity. A unique being, the golem left Zaun, distressed by the controversy and feeling there was no place he could fit in. Now he searches the lands of Valoran to find a place where he might someday belong. 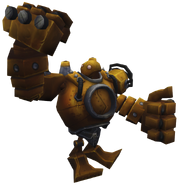 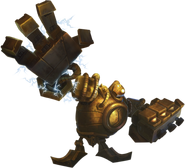