To raise Rudolph like a normal reindeer despite his red nose.

Blitzen is the brother of Dasher, Comet and Cupid, the husband of Mitzi, the father of Rudolph, the uncle of Arrow, the brother-in-law of Arrow's mother, a lead reindeer on Santa Claus's sleigh team, one of the supporting characters in the 1998 film Rudolph the Red-Nosed Reindeer: The Movie and a minor character in it's sequel book Rudolph Saves The Sprites. He is based on Blitzen from Christmas folklore.

He was voiced by Garry Chalk.

Blitzen first appears at the beginning of the film in his house with Mitzi and their newborn son whom they name Rudolph. Blitzen then encourages Rudolph to come over to him but when trying to do so, Rudolph trips and tumbles into a hay bale. Blitzen and Mitzi rush over to see if he is okay and are relived to see that he is unharmed but get a shock when Rudolph sneezes causing his nose to light up. Later, Blitzen along with Mizti takes Rudolph a tour of their village but worries what would happen if the other villagers find out about Rudolph's nose. Just then Blitzen's brothers and fellow Flyers, Comet, Cupid and Dasher arrive wishing to see Rudolph whom Blitzen tries to hide from them but is persuaded by Mitzi not to. Cupid then playfully tickles Rudolph, causing his nose to glow again which the catches the attention of other villagers but Blitzen tells them it's an allergy before he and Mitzi leave to take Rudolph home. As they leave they sing "What About His Nose" and the villagers laugh at Rudolph's nose causing Blitzen and Mitzi to take a confused Rudolph away.

They then arrive at Santa's workshop where one of the elves throws a teddy up to Blitzen who gives it to Rudolph before witnessing the arrival of Stormella who closes her bridge of to public after Santa refuses to give over Boone and Doggle, the elves who unintentionally damaged her ice garden and threatens to cast a storm to put Santa out of business if anyone crosses it.

Blitzen then briefly appears a year later on Christmas Eve with his brothers and the other Flyers guiding Santa's sleigh into the sky whilst being watched by Rudolph, Mitzi and the other villagers.

A few years later, Blitzen along Mitzi watches a now teenage Rudolph take part in The Junior Reindeer Games and is happy when he wins but the celebrations are short lived when he gets disqualified after he supposedly used his nose's light to cause his cousin Arrow to crash into other competitors (where actually it was Arrow's taunts that caused Rudolph's nose to go off) and is seen arguing with the referee saying that the nose problem was an accident, unaware that Rudolph is listening to this and thinks that his father is ashamed of him. That night, Blitzen and Mitzi return home and find a note from Rudolph telling that he has left much their sadness just as Rudolph's friend Zoey arrives looking for him only to be told by Blitzen that he ran away, this news causes Zoey to go and look for Rudolph and ends up crossing Stormella's bridge. Blitzen and Mizi along with Zoey's parents go to Santa for help to find them, to which he sends Boone and Doggle.

On Christmas Eve, Stormella has cast her storm causing Santa to tell Blitzen, Mitzi and the other villagers that he might have to cancel his deliveries but then one of the elves points out a red light approaching and they go outside and see Rudolph along with Zoey, Slyly, Leonard, Boone and Doggle arriving and there is a reunion between Blizen, Mitzi and Rudolph, who apologies for worrying his parents. After Rudolph agrees to use his nose to guide Santa and the Flyers through the storm, Blitzen tells his son that he is proud of him. After returning from delivering the presents, Blitzen gives Rudolph a piggyback ride as the young reindeer is given a heroes welcome by the villagers. Blitzen is last seen along with the other villagers at Santa's house singing Rudolph the Red-Nosed Reindeer.

Rudolph the Red-Nosed Reindeer: A Retelling of the New Animated Movie

In this novelisation of the film, Blitzen appears twice in the book. First, when he and Mitzi are seen with Santa reading a note Rudolph left them after running away. Secondly, seeing Rudolph return before joining him and the other Flyers in getting through the storm.

In this book (which takes place after the film), Blitzen, his brothers, and the other Flyers go with Santa to find the Sprites of the Northern Lights after they failed to appear at the winter celebrations to perform their light show.

Blitzen returns to home to Mitzi and Rudolph and says that he, Santa and the Flyers didn't find the Sprites, but will look again after a hot breakfast and a quick nap.

Blitzen has light greyish brown fur with cream underbelly, black tipped ears, lightning bolt shaped markings on his muzzle, brown eyes (which he passes down to Rudolph) with dark circles around them. He also has long anthers and like all Flyers (nickname for Santa's reindeer), he wears a Medal of Valor.

In the books, Blitzen's appearance differs slightly as he has dark brown fur and lacks his Medal of Valor.

Blitzen and Mitzi giving Rudolph a tour of Santa's Village

Blitzen and the Flyers aided by Rudolph through Stormella's storm

Biltzen telling the Elves and the Reindeer to stop making fun of Rudolph's nose. 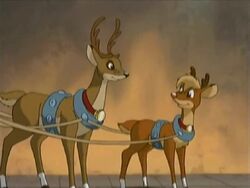 Retrieved from "https://hero.fandom.com/wiki/Blitzen_(Rudolph_the_Red-Nosed_Reindeer:_The_Movie)?oldid=1689733"
Community content is available under CC-BY-SA unless otherwise noted.