Heroes Wiki
Register
Don't have an account?
Sign In
Advertisement
in: Candidate for Deletion, Ben 10 Heroes, Cartoon Heroes,
and 17 more

Blitzwolfer's appearance is based on a classic werewolf. He has grey fur, a long flowing mane, and a large bushy tail, with three sharp claws on each hand. The inside of his mouth is green. Blitzwolfer wore the Prototype Omnitrix symbol on his lower stomach in the original series.

In Ultimate Alien, Blitzwolfer's mane and tail have turned black. He retains the same clothing from the original series, the inside of his mouth is now red, his mouth is now white and he wears the Utimatrix symbol on his chest.

In Omniverse, Blitzwolfer's suit has a new green suit and green wristbands. His Omnitrix symbol is located on his collar above his fur. 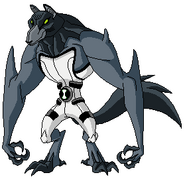