Member of the Tank Gang

Bloat is one of the members of the Tank Gang and a minor protagonist of the Disney Pixar film Finding Nemo.

Bloat is a porcupine pufferfish from "Bob's Fish Mart" who lives in Philip Sherman's office tank. When he gets scared or agitated, he bloats up, and then one of the other fish has to deflate him.

In the ending of the film, Bloat and the rest of the Tank Gang escape the aquarium exactly as Gill had planned, but Bloat then asks, "Now what?", ending the gang's joy of escape and causing them to worry about how they will get out of their plastic bags. However, during the credits, the tank fish have escaped their bags somehow (although this is proven to be non-canon in the sequel Finding Dory, where the Tank Gang are shown to still be in the now algae-filled bags as they reach the Marine Life Institute in California and are picked up by the staff for rehabilitation in the post-credits scene). As the credits continue to roll, Bloat is seen having a brief dispute with Gurgle. He then bloats up, and Gill and Gurgle start spiking Bloat around like a volleyball. 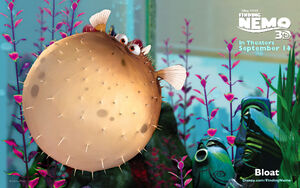 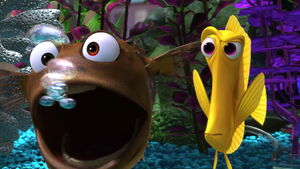