No information
Bloodshot is a former soldier with powers of regeneration, technomancy and meta-morphing made possible through nanites injected into his blood. After escaping from his masters at Project Rising Spirit, Bloodshot seeks to discover his true identity and other purpose besides killing.

The man known today as Bloodshot is not the first of his kind. For decades, countless men were roped into a mysterious government program run by Project Rising Spirit, in an attempt to make the ultimate super soldier. Most of the subjects failed, but in the 21st century the Project tried again, using their recent studies in artificial intelligence and nanites to make a brand new, perfect soldier. In an attempt to avoid the emotional and mental problems previous subjects had faced, the Project used Nanites to manipulate the new Bloodshot's memories. Sometimes he was a prisoner on death row given a new lease on life, and other times he was a washed up former athlete. However, none of these memory files would "stick". This led to rampages, and the Project having to try over and over again. This means no one, even Bloodshot, knows who he truly is, after so many fake, broken lives. The first memory to really stick was that of Raymond "Ray" Garrison, a trained soldier fighting to protect his family, and that became his "real" life. "Ray's" physiology was enhanced further, granting him a healing factor, super strength, and powerful technopathy.

For years, "Ray Garrison" was used in simple operations in the Middle East and wherever he was needed. Soon, however, Project Rising Spirit was made aware of the growing presence of Psiots, a subspecies of humanity who all possess powerful psychic abilities. As the Bloodshot Program's resources were diverted to the growing crisis, a scientist named Kuretich fled the Project, and joined the Psiot-run Harbinger Foundation. While Bloodshot was running an assassination attempt on a young psiot in Afghanistan, Bloodshot was captured, and the rogue scientist reprogrammed Bloodshot's nanites to reveal the fakeness of his memories. Bloodshot agreed to work with Kuretich under the agreement that the scientist would help him find his true identity.

Kuretich, and his new boss Toyo Harada, sent Bloodshot after his old masters. Aided by a young psiot named Pulse, Bloodshot attacked a PRS facility in Nevada, where a number of young psiots were imprisoned under a sadistic jailer named Gamma. While battling Gamma and the cyborg hit squad called Chainsaw, Pulse lost her life, forcing Bloodshot to free the children on his own. This, however, turned out to be a mistake, as some of the younger psiots, using the name Generation Zero, ended up causing a massive conflict in Las Vegas between PRS, the Harbinger Foundation, the psiot Renegades, and Bloodshot himself. Bloodshot attempted to aid the Generation, but despite his efforts, he ended up kidnapped and imprisoned by Toyo Harada.

Back With the Project

When PRS discovered their most powerful weapon was in the hands of their most powerful rival, they organized a raid on Foundation headquarters. The recently-reinstated H.A.R.D. Corps, a team of artificial psiots who had previously been used to stop Bloodshot's rampages in the early days of the experiments, were successful in infiltrating the Foundation and extracting Bloodshot. The cyborg agreed to work for the Project once more, now as a field leader for the Corps, in exchange for his original personnel files. Despite these files not providing any solid answers on his identity, only raising more questions, Bloodshot allowed himself to be roped into multiple H.A.R.D. Corps missions. This all turned out to be a ploy, however, with Bloodshot using the trust he'd gained by the Corps as a tool in order to facilitate his escape. For the first time he could ever remember, Bloodshot was free--not controlled by the Project, not manipulated by Kuretich, not a member of the H.A.R.D. Corps. His own man.

For a living weapon such as Bloodshot, however, freedom does not bring peace. He attempted to isolate himself in the Amazon Jungle, but he was soon roped into the outside world once more when MI-6 and M.E.R.O. kidnapped him and recruited him into the war effort against an invading force of aliens known as the Armor Hunters. He worked alongside superhero team Unity in driving them off. After the invasion was over, Bloodshot continued to work with MI-6, and was eventually sent on a seemingly routine mission to recover a strange box from the Pacific Rim. It was soon discovered that whatever the box contained was the only thing in the world that stood a chance at stopping an immortal weapon of destruction called the Immortal Enemy. As the Enemy's rival, Gilad the Eternal Warrior, led the heroes of Earth against him, Bloodshot was sent to guard the embodiment of Earth, Kay McHenry. As they ran from the Enemy, the young woman and Bloodshot grew closer. She helped remind him that he can be more than a mindless murder machine. However, the front line of heroes eventually fell, and the Enemy reached Kay and Bloodshot. The cyborg fault valiantly, but the Enemy was simply out of his league, and it managed to kill Kay. With her dying breath, she used her healing powers to flush the nanites from Bloodshot's system, restoring his lost humanity.

Now a normal man for the first time in years, Bloodshot--adopting the name "Ray Garrison", despite knowing it may not be who he really is--tried to live a normal life in Colorado. He found himself haunted by Kay's death, as well as everything he had done in his time as a killer. These regrets manifested themselves as a hallucination of a cartoon version of himself, called Bloodsquirt, as well as hallucinations of Kay herself. His tortured peace does not last long, however, as he discovered that PRS was seemingly transforming ordinary people into killers. He reclaimed his nanites, and hunted down the killers, becoming attached to someone once again when he saved a young woman named Magic from the killers.

After stopping the outbreak of the Bloodshot-lookalikes, Bloodshot found himself kidnapped and stranded on a mysterious island. Antagonized by an incredibly powerful cyborg named Deathmate, he discovered a group of men with powers just like him. Named the Bloodshot Squad, the group was made of former subjects of PRS's Bloodshot Program, making them Ray's predecessors. The Squad revealed to Ray that this was all a ploy by the Project. They were there to test the prowess of Deathmate, who was in reality the resurrected Kay McHenry. While the Squad managed to escape with their lives, PRS simply moved on to the next phase of their plan: The Bloodshot Virus. 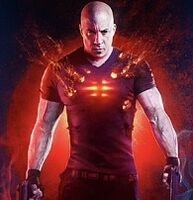 Vin Diesel as Boodshot in the filn on 2020
Add a photo to this gallery
Retrieved from "https://hero.fandom.com/wiki/Bloodshot?oldid=1823962"
Community content is available under CC-BY-SA unless otherwise noted.