Kill Superman (failed).
Complete the mission to prevent Waller from harming his daughter.
Stop Starro the Conqueror.
Blackmail Waller into granting him and his teammates freedom (all succeeded).

Robert DuBois, also known as Bloodsport, is the main protagonist of the 2021 film, The Suicide Squad, and a mentioned character in Peacemaker. A military veteran turned assassin, Bloodsport was sentenced to Belle Reve after attempting to kill Superman, and was forced to join Task Force X after being extorted by Amanda Waller. Leading the second Task Force X team, he was assigned to destroy any evidence of Project Starfish on Corto Maltese.

He is portrayed by Idris Elba, who also played Heimdall in the Marvel Cinematic Universe, John Luther in the titular BBC series, Stacker Pentecost in Pacific Rim, Roland Deschain in the 2017 film adaptation of The Dark Tower, and also voiced Truck in Call of Duty: Modern Warfare 3, and Knuckles the Echidna in the film, Sonic the Hedgehog 2.

Robert DuBois was born in the United Kingdom to an unnamed father, whom was a trained mercenary who decided to have his son to become one as well. Robert had a rough upbringing since he was trained to become a killer since he was born, and his father would sometimes punish him when he either failed something, or didn't do as he was told. One time, Robert's father locked him in a cell full of starving rats, causing DuBois to develop musophobia at an early age.

Robert would go to join the military, but would either leave or be discharged, and married a woman who had his daughter, Tyla. DuBois later divorced his wife for unknown reasons, and developed a neglectful and distant relationship with his daughter. It's implied that DuBois doesn't want to be a bad influence for his daughter since he was a criminal, but still cared about her deeply.

After leaving the military, Robert decided to become an assassin like his father and took on the codename "Bloodsport", and was often hired to kill targets. He was eventually hired to eliminate Superman, but failed as he only caused the superhero to be sent to the ICU since DuBois used a Kryptonite bullet. Robert was arrested and sentenced to Belle Reve, a federal penitentiary that was used to place powerful criminals and supervillains.

By 2021, Robert is still serving his prison sentence in Belle Reve, and is first seen cleaning the facility from the other inmates. While cleaning, DuBois is greeted by Amanda Waller, and quickly deduces why she's there, tells her that he will not be joining her suicide squad. Waller then tells Robert that he has a visitor, and goes to speak with Tyla, who reveals that she has a court date for stealing a smartwatch. Amidst a heated argument, Tyla tells her father that the reason she came was because that Waller informed her that she could be pardoned if Robert helped her. After speaking with Tyla, DuBois confronted Waller, who extorted him to join Task Force X after threatening to harm his daughter.

Robert decides to accept Waller's offer, and is informed by Amanda that she wants him to join the squad due to his training and experience to lead a second team of Task Force X. Waller then tells Robert and his teammates, Peacemaker, King Shark, Ratcatcher II and the Polka-Dot Man about the mission - to destroy any evidence of Project Starfish by abducting the Thinker and destroying Jotunheim on Corto Maltese. After landing on the island, Bloodsport nearly kills King Shark when the latter attempts to eat Ratcatcher while she is sleeping, but is stopped when Ratcatcher has the group make an agreement to be friends. The following day, Bloodsport is contacted by Waller, who assigns the team to rescue Rick Flag from enemy territory.

After starting a contest with his new rival Peacemaker, Bloodsport finds that Flag is speaking with Sol Soria, whom is a rebel leader who decides to help the team since they both want to stop the Corto Maltese Armed Forces. The team then go on to kidnap the Thinker at a nightclub, but also party there where Bloodsport forms a bond with Ratcatcher. When the Corto Maltese military arrive at the scene, Bloodsport diverts the attention of the officers by having himself, Peacemaker and Flag be arrested while the others escaped. Defeating the officers, Bloodsport meets with his team, and Flag decides that they should first rescue Harley Quinn, who is on the island under the imprisonment of Mateo Suarez. When preparing to execute their plan, they are met by Harley, who managed to escape and introduces herself to DuBois.

The team then split up into two to place explosives on Jotunheim while the other are escorted by the Thinker to his creation, Starro. While dealing with guards in the area, Polka-Dot Man accidently causes a explosion that floods the building, causing Bloodsport to fall through several floors. Landing on the last one, Bloodsport finds himself seeing Ratcatcher and Peacemaker, and learns that Peacemaker killed Flag to prevent the evidence from being exposed since Waller promised him a pardon. Seeing that Peacemaker intends on murdering Ratcatcher for the file, Bloodsport has a stand off with Peacemaker, and wins by using his smaller bullets. After stopping Peacemaker, Bloodsport and Ratcatcher reunite with their teamamtes and learn that Starro escaped from confinement due to the explosives, and is now attacking the citizens of Jotunheim.

Bloodsport is contacted by Waller, who tells him to leave Jotunheim, but DuBois decides to instead disobey orders and stop the creature. Before the team could be killed with the explosive devices implanted in their heads, Waller's staff knock her out and task the group with stopping Starro. Despite the death of Polka-Dot Man, Bloodsport and the team manage to kill the creature with Ratcatcher's rats and Harley impaling Starro's eye with the Javelin's weapon. After defeating Starro, Bloodsport blackmails Waller for him and his teammates freedom so her connection with the Corto Maltese isn't revealed. While leaving, Robert is seen petting the rat Sebastian, indicating that he is now moving pass his musophobia.

Robert DuBois is a bitter and rather foul-mouthed individual with a low opinion of himself, who as put in his own words "has nothing good to offer to anyone". DuBois does not get along with others, claiming that he's not fit to be a leader and often resorting to snarky rude commentaries to other people's opinions. Being a trained assassin, he has little care for murdering people, even getting into a petty killing competition with Peacemaker.

DuBois has a very estranged relationship with his daughter, his conversation with her devolved into both of them cursing each other and DuBois telling her not to follow his steps. He is reminded of his toxic relationship with his own father who would abuse him repeatedly; one time his father locked him in a crate full of rats for 24 hours which caused him to develop a musophobia. Nonetheless he does genuinely love his daughter even he does not show it, he threatened to kill Amanda Waller when she used his daughter as blackmail to force him to join Taskforce X and reluctantly accepted in order to keep his daughter out of jail.

During his time with Taskforce X Bloodsport slowly grows to trust his team mates, namely Ratcatcher despite his fear of rats. His interactions with Ratcatcher allowed him to reflect of his daughter and rethink his life choice, he then allowed himself to relax and have fun while at the night club before their ambush on The Thinker. Still, Bloodsport kept his rude and tough attitude when more serious matters are at stake. Bloodsport is frequently seen having little patience for his team mates' shenanigans such as Harley's insanity or King Shark's habit of eating humans.

Eventually Bloodsport came to trust his team enough to properly work with them and empathize with their life situations, when he found Peacemaker attempting to kill Ratcatcher he immediately knew that Pacemaker had betrayed the team and shot him to protect RatCatcher. When Starro escaped from the wrecked Joutenheim and went on a rampage on Corto Maltese Waller demanded that Taskforce X retreated and allowed Starro to destroy the island and kill millions unimpeded, Bloodsport's newly developed consciousness over life refused to let him walk away, he disobeyed Waller's orders despite knowing that she could detonate his neck bomb to go fight Starro and save all the innocent lives, the few members of Taskforce X that were still alive all opting to follow him with him as the leader.

Ultimately Bloodsport would decide use the evidence of USA's involvement with Starro's rampage which Rick Flag died to obtain in order to blackmail Waller into pardoning their betrayal and pardon his daughter's crimes, getting his comeuppance over Waller's previous blackmailing on him before. Bloodsport was then seen attempting to pet RatCatcher's pet rat, showing he's slowly overcoming his fear of rats as well as improving himself. 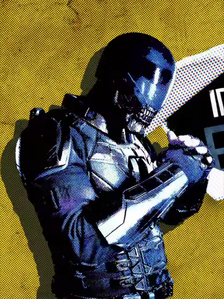 Bloodsport in the roll call trailer. 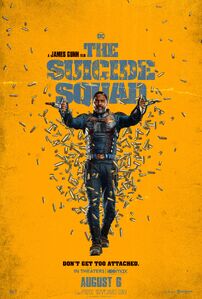 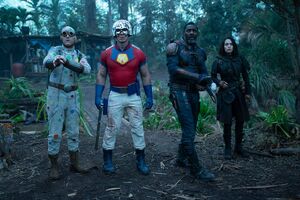 Bloodsport with his teammates - Ratcatcher II, Peacemaker, and the Polka-Dot Man.