Escape Dizzyland as a human with Mumu (Failed)

Bloody Bunny is the titular main protagonist of the YouTube series of the same name.

Its head is round and somewhat oval, its ears are like ice cream popsicles almost entirely, one has a red interior (although sometimes in its designs it is shaded black above) and the other has instead a scar stitched with 2 points, his body is oval rectangular (sometimes more in some designs) and in the center of his belly he has his stitched scar which has 2 points, his legs are not human but of a doll, his arms have hair where the hands are It looks like a ball with medieval spikes (maybe) in The Firts Blood, not all the hair covers her hands being more notable, her nose is a soft red triangle on the back that is connected to her mouth which is a firm line on 2 that form the 2 sides of a triangle, and their eyes are medium circles (since they have an expression of seriousness and probably anger) and they have orange, red and black pupils in small. Their face sometimes always expresses seriousness or tranquility and sometimes much more angry to seem more threatening to his opponents.

Although she is a Hero, she is a vindictive, cold, calculating, serious and somewhat bitter creature, she has an addiction with solving everything to death by killing the badly without mercy and destroying certain things, her personality in most of the time is serious and less optimistic (maybe), he has no mercy or compassion for those he murders or attacks, this because many were lacking mercy towards her and suffered a very cruel death, however deep down he is a good person something sweet but overprotective that only tries to protect her sister Mumu and other innocent people and beings, she usually begins to feel a lot of hate for those who hurt her or her sister, however on some occasions she is pious with many as long as do not attack or do something wrong that is demonstrated since in chapter 11 of TFB she did not attack the Skull Minions Visitors of Dizzyland

Bloody Bunny's origin story is that she was a god to the humans millions of years ago, but that is not the true story. (This depiction of her story is featured in Ayupan x Bloody Bunny (her gender was mistaken for a boy as referred as a “He”.)

Her true story begins in the year 20XX. The world now belongs to sentient dolls, and humanity is enslaved and transformed to living dolls by the evil doll organization. In the first episode of Bloody Bunny, Reborn, a red-haired girl is seen attempting to escape from a doll factory with a small doll, who is actually her sister, Mumu. Just as the girl is about to exit, a mechanical claw grabs her and separates her from her sister, throwing her into a furnace with blades. It seemed that she perished, but it is revealed that her soul was implemented into a bunny doll.

In the second episode, Awaken, the girl (now called "Bloody Bunny"), remembers what her original goal was, and after killing multiple Skull Minions, manages to reunite with Mumu. In Escape, the third episode, BB encounters the Dark Bosses for the first time. The group consists of four leaders: Dark Rabbit, a black-furred rabbit plushie; Serious Kuma, a large brown bear with a hammer as a weapon; Bye-Bye Kitten, an innocent-looking waitress kitten that seems to resemble a certain other cat; and Razor Mane, a carousel horse made completely out of metal and sharp blades. Just before Dark Rabbit is about to decapitate Bloody Bunny, a large, monstrous stuffed animal bounds in and causes a distraction, allowing the sisters to flee.

In the next episode, BB wakes up in a forest with bandages over the wounds the Dark Bosses inflicted on her. She sees a mysterious figure cooking Mumu, and she immediately rushes to the rescue. After a brief fight BB was beaten, and the mysterious figure was revealed to be the Kung-Fu master, Sloth Doll, and it is shown that he was not cooking Mumu, but instead, making a warm bath for her. He offers food and shelter, and the sisters heal and regain their strength there. Bloody Bunny relentlessly trains with Sloth Doll during this time, learning the Way of Sword so she can defeat the Dark Bosses.

After Bloody Bunny finishes her training, she travels with her sister to find and kill the Dark Bosses. The first victim is Serious Kuma, who was scalped from scraping his head against the ceiling of a train tunnel. Bye-Bye Kitten was killed next, taking the worst beating out of all of the Dark Bosses: Her eye was ripped out, her hands were stabbed, her face was smashed into the table, and was finally thrown into an oven and cooked to death. Razor Mane was the third boss to be killed, attacking BB on a carousel ride before having her upper face sliced off, just above the jaw. The final member remaining was Dark Rabbit, but he was not killed at first. Instead, he kidnapped Bloody Bunny and Mumu, bringing them to a facility that contained a machine that provided large jolts of energy. He attempted to unlock Mumu's ultimate power, unintentionally revealing that the mysterious monster that destroyed the Doll Factory was really Mumu.

Dark Rabbit ordered Mumu to kill Bloody Bunny, but the younger sister remembered who Bloody Bunny was, and was snapped out of her trance. Enraged, Dark Rabbit stabbed Mumu's head, causing her to fall under his control again. Mumu goes on a rampage, destroying Dizzyland as Dark Rabbit and Bloody Bunny initiate their final battle. In the final seconds of the battle, an explosion was caused by the two plushies' swords colliding, destroying the entirety of Dizzyland and all of its inhabitants.

However, at the very end, there is a picture of a blade embedded in rocks. It zooms in, showing only a white paw grabbing the handle of the blade and retrieving it from the rubble. This is symbolic of Bloody Bunny's survival, and a possible teaser for her return. 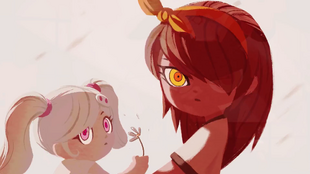 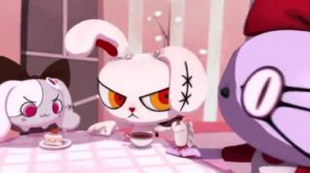 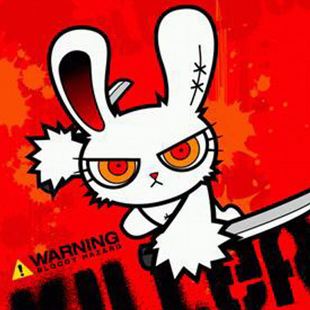 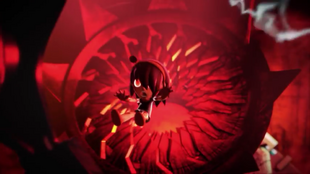 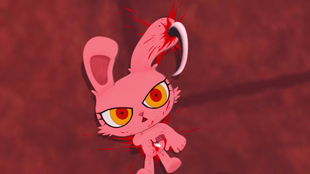 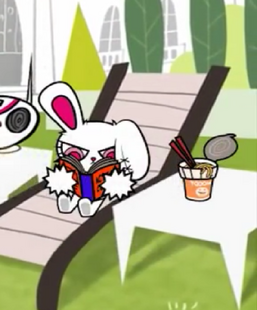 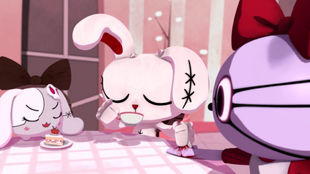 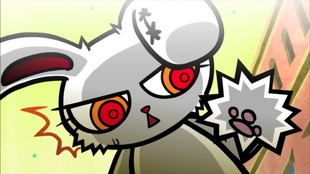 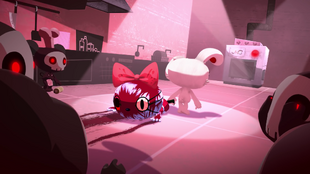 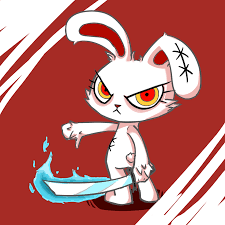 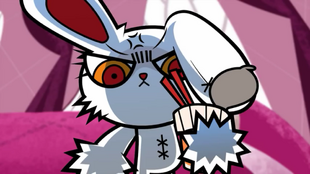 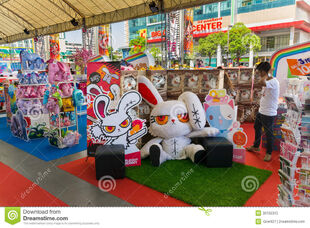 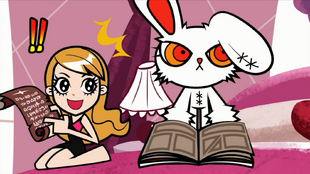 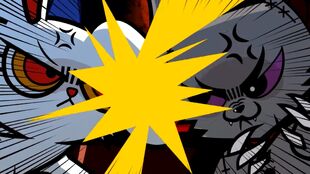 Bloody Bunny vs. the Vampire Lord
Add a photo to this gallery
Retrieved from "https://hero.fandom.com/wiki/Bloody_Bunny?oldid=1666503"
Community content is available under CC-BY-SA unless otherwise noted.