Heroes Wiki
Register
Don't have an account?
Sign In
Advertisement
in: Candidate for Deletion, Ben 10 Heroes, Aliens,
and 8 more

Being an organosillicon-based life form with segmented hardened quasi-organic polymer skin, Bloxx's body is made up of individual blocks that he can rearrange at will. His appearance looks similar to that of a gorilla made out of building blocks. He has three main colors, which are red, blue and yellow, with black lines all over his body. He is mostly red and yellow with some spots of blue. His feet are stubs and his hands are extremely large, balancing most of his body. He has studs all over his body.

Bloxx wears the Omnitrix symbol on his chest.

Despite his shape-changing abilities, Bloxx can be broken when hit with enough force, but can easily rebuild himself right after.

Beings that can become intangible, such as Ectonurites, can easily phase through Bloxx if he traps them in his dome form.

While Bloxx is highly durable to an extent, he still feels pain, as seen when he was acting as a railway bridge to save a train. Similarly, plummeting through Earth's atmosphere caused him great discomfort, enough to make his butt feel like it was "on fire".

Bloxx's strength has a limit, as he was unable to punch through a force field surrounding a bomb.

Bloxx is vulnerable to acidic substances, whether it be liquid or gaseous.

Like any other organic being, Bloxx is vulnerable to being erased from existence by a Chronosapien Time Bomb.

Bloxx first appeared in "The More Things Change: Part 1", where he saved Mr. Baumann's shop from being destroyed with Rook's help.

In A Jolt from the Past, Bloxx fought Fistrick and his gang.

In Have I Got a Deal for You, Bloxx saved a train from falling off a bridge before battling the Screegit and contained it long enough for Professor Hokestar to revert the Screegit to its original form.

In Many Happy Returns, Bloxx stopped a Tetramand warship from attacking his team.

In Bros in Space, Bloxx made the process of extracting the Amber Ogia on Revonnah easier.

In Rules of Engagement, Bloxx blocked the way of Julie and Hervé so he could explain himself to the former.

In Rad, Bloxx tried to catch the Gracklflint, but failed and helped Rad Dudesman make a trap for it.

In The Frogs of War: Part 1, Bloxx saved himself and Rook when they crashed into Milleous' ship.

In O Mother, Where Art Thou?, Bloxx was defeated by Ma Vreedle.

In For a Few Brains More, Bloxx took Azmuth's brain from Ultimate Albedo and was defeated by Negative Ultimate Humungousaur.

In Universe vs. Tennyson, Bloxx saved himself, Mr. Baumann, and Fistrick from crashing before trapping the latter so Rook could arrest him.

In Rook Tales, Bloxx was defeated by Kundo.

In Breakpoint, Bloxx saved Rook from being burnt to death in the Earth's atmosphere before he reverted.

In It's a Mad, Mad, Mad Ben World: Part 2, Bloxx and Handy Man gave water to the enslaved Benwood citizens.

In Let's Do the Time War Again, Skurd gave Gravattack the Bloxx-Lobber to catch the Time Beast.

In A New Dawn, Bloxx appeared for a short time when Ben was cycling through his aliens.

Bloxx with a Shield Arm

Bloxx as a catapult 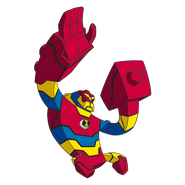 Bloxx with a Hammer Hand