Being with Speckles (before dying)

Marry Speckles (succeeded), Raise her children, Make sure her family is safe

Her mate and children

Blue-Eyes first appears after Speckles witnesses One-Eye successfully kill a Therizinosaurus. She cautiously walks over to the dangerous Tyrannosaurus, hoping to share his catch. Angerly, One-Eye chases her off, as Speckles manages to steal a piece of meat behind them, and escape into a cave. As he looks up from his food, he sees Blue-Eyes standing there, surprising him. The two Tarbosaurus growl at each other over the meal, until Blue-Eyes takes it from Speckles, and proceeds to eat. Speckles notices that she is starving, and feels sorry for her. He then shares the meat with her. Over the years, the two form a close bond, and travel together. Five years later, One-Eye returns, and attacks Blue-Eyes while she and Speckles are hunting, near a tar pit. While she recovers, Speckles lures One-Eye into the tar, trapping him.... but not for long! The Tyrannosaurus frees himself, and both she and Speckles are forced to move to a new home. On the way there, she weakens from exhaustion, and collapses, while Speckles notices a nearby hot spring. They reach it, and the water soothes Blue-Eyes's wounds. The two Tarbosaurs now know that they've reached their new home.

Ten years pass, and Speckles is eating a kill, with his friend, on a cliff ledge. Little do they know, One-Eye is watching them, nearby. The evil Tyrannosaurus then shoves a boulder off of a ledge above the two, knocking Speckles into a deep lake below. This leaves only Blue-Eyes, and One-Eye. The Tyrannosaurus is revealed to be searching for a mate, so with Speckles out of the way, he attempts to mate with Blue-Eyes, but the young female Tarbosaurus resists him and fights back. Although she briefly overpowers him, One-Eye soon proves to be too strong and towers above her, ready to rape her. Speckles arrives just in time to rescue her, and confronts his old nemesis. Now that he is big enough to battle One-Eye, he prepares to fight, but freezes at the sound of the Tyrannosaurus's thundering roar. As One-Eye charges Speckles, Blue-Eyes intervenes, biting the evil Tyrannosaurus's tail in anger. One-Eye, however, quickly breaks free and furiously shoves her to the ground again. As a horrified Speckles urges Blue-Eyes to get up, One-Eye takes advantage of the distraction to grab Speckles by the throat, trying to push him off the cliff again. Watching Blue Eyes on the ground causes Speckles to have a flashback of his mother's death. This gives him the strength to defeat One-Eye, who lumbers away, as Speckles roars in triumph at the top of the cliff, Blue-Eyes at his side.

Afterwards, Speckles returns to his childhood nest with Blue-Eyes, and the two start a family together. Soon, three of their eggs hatch, with one of them looking just like Speckles. The hatchling is named Speckles Jr., or Jr. for short. Blue-Eyes and her mate are living peacefully with their children... until one day, the ground begins to shake, and clouds darken the sky. Nearby, a volcano erupts, causing the dinosaurs in the area to flee in terror. Speckles and Blue-Eyes escape with the hatchlings, through a cave, but one of their children is killed in a rockfall, and Blue-Eyes injures her leg while saving their second hatchling. They eventually escape the area, and travel through the desert, with the other surviving dinosaurs. Meanwhile, a large pack of hungry Velociraptors pursue them, waiting for weakened dinosaurs to fall. Suddenly, Blue-Eyes collapses from her injured leg, and alerts the Velociraptors, who close in on her. Speckles kills many of them, but the small carnivores don't give up easily, and surround Blue-Eyes and her family. Too weak to go on, Blue-Eyes then breathes her last breath in front of Speckles, who is grief-stricken at the loss of his mate. Determined to protect his remaining family members, Speckles then escapes the raptors, with his two hatchlings. Before leaving the desert, he looks back at Blue-Eyes' corpse, and roars at the sky in mourning.

Blue-Eyes is portrayed as a mostly instinct governed animal, like all dinosaurs outside of Speckles as the film's first person perspective narrator. However, Speckles' observations of events gives the view that while originally a desperate young dinosaur doing what she must to survive of the land as a scavenger, she becomes a reliable hunting partner. Blue-Eyes was also a very protective and tentative mother and above all she seems to accept the laws of nature, whether that is resorting to less than proud methods of gathering food, acknowledging peace offerings from other potential rivals or accepting of her own death for the sake of her young, Blue-Eyes seems to be completely devoted to the laws of the wild. She was faithful to Speckles until her death and loved him very much.

Blue Eyes has the sort of massive stature, strength and endurance native to her species. In addition she also works well with Speckles to coordinate team attacks. On her own she is demonstrated to have adept hunting skills. 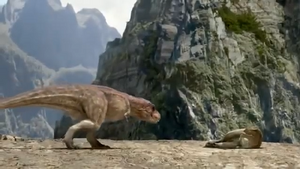 Blue-Eyes is nearly raped by One-Eye. 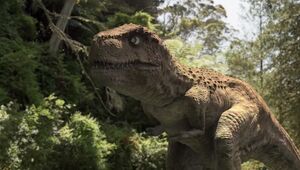 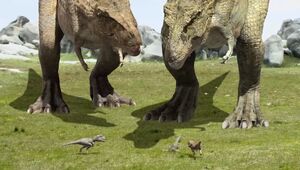 Blue-Eyes with her family 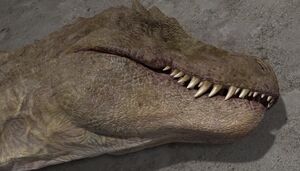 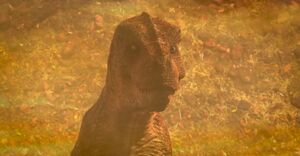 Blue-Eyes as Speckles's reflection in Dino King 3D Journey To Fire Mountain.
Add a photo to this gallery

Retrieved from "https://hero.fandom.com/wiki/Blue-Eyes_(Speckles_the_Tarbosaurus)?oldid=1850952"
Community content is available under CC-BY-SA unless otherwise noted.