Yu-Gi-Oh! The Movie: Pyramid of Light

Honorable Dragon
Blue-Eyes Shining Dragon is a dragon from the Yu-Gi-Oh!: The Movie franchise and in the video games.

It was used by Kaiba to defeat Yugi, but then used by Yugi to destroy Anubis. Killing itself in the process.

He is a powerful dragon that he gets stronger for every dragon in the graveyard, Blue-Eyes Shining Dragon has the ability to cancel any effect cards like Effect Monster, Spell or Trap Card where the player chooses a effect to activate.

Blue-Eyes Shining Dragon can be summoned by sacrificing Blue-Eyes Ultimate Dragon to transform him into his powerful card. 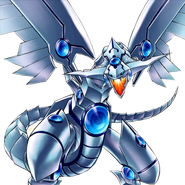 Add a photo to this gallery
Retrieved from "https://hero.fandom.com/wiki/Blue-Eyes_Shining_Dragon?oldid=1751530"
Community content is available under CC-BY-SA unless otherwise noted.