Start a Wiki
Blue-Eyes Toon Dragon is Blue-Eyes White Dragon's other rival that appears in Yu-Gi-Oh! series, he is one of the Toon Monsters who are the cartoon version of the regular Monsters in the animated series. He is better known for his mischievous grin.

His enemy is Blue-Eyes White Dragon.

In Yu-Gi-Oh! The Movie, he appeared as an anti-hero when he holds the rocks along with Toon Dark Magician Girl but both are presumably destroyed in the process during the battle against Anubis.

Blue-Eyes Toon Dragon is portrayed as a child version of Blue-Eyes White Dragon, similar to Toon Link from The Legend of Zelda franchise.

This Toon Monster is summoned by Toon World when the player pays 1000 Life Points to activate this card. 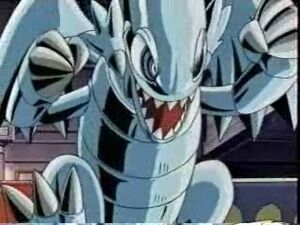 Blue-Eyes Toon Dragon as he appears in the anime series 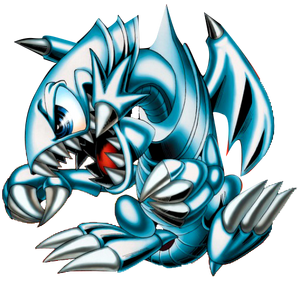 Add a photo to this gallery
Retrieved from "https://hero.fandom.com/wiki/Blue-Eyes_Toon_Dragon?oldid=1665699"
Community content is available under CC-BY-SA unless otherwise noted.