He is voiced by Shouma Yamamoto.

Blue has blue hair, and eyes. He wears a white shirt, with blue pants which match the same color with his hair. He also wears white shoes.

Blue appears to be gentle, and really kind towards people. He also knows how to play the guitar. 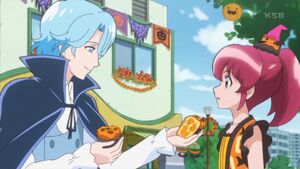