Member of the Teen Titans

Blue Beetle is one of the main characters of directed to video 2016 animated film Justice League vs. Teen Titans, and one of the tritagonists of its 2017 sequel Teen Titans: The Judas Contract.

He is voiced by Jake T. Austin.

In need of help with mastering the Scarab's with the help of Ted Kord in Chicago, he now knows its abilities without knowing its true purpose, Reyes was taken in by Starfire at the Titans Tower and became a member of the Teen Titans. He didn't think they had anywhere else to go since they were freaks. Reyes warned the others never to annoy the Scarab since he didn't have full control over it.

During Robin's time at the Tower, he continue's to insult and push back the Titans, especially Blue Beetle. The next day, Robin used the training simulator for an hour and a half straight and refused to stop or let the others join in. He wouldn't listen to Starfire either, so Blue Beetle turned the machine off. Growing tired of his attitude, Jaime tries to talk to Damian in the training room about showing the Titans respect, then Robin immediately attacks which leads the two to fight. Robin challenged Beetle and threw a Birdarang at him claiming he heard the Scarab technology was fast. Starfire tried to calm the tensions, but Robin started picking a fight with her. Blue Beetle had enough of his disrespect and fashioned blades from his arms. They fought. Robin inquired who he was fighting, Reyes or the Scarab. Reyes mused he better hope it was him. Robin declared while Reyes wore a weapon, he was a weapon. At first, Robin had the upper hand, until the scarab takes control of Blue Beetle, The Scarab formed a cannon on Beetle's chest and fired off a massive blast point blank on Robin's face, burning half of it which nearly kills him. The rest of the team break up the fight and Raven uses her powers to heal a barely alive Robin. Reyes apologized then left with the others to tend to Raven. Later that night, Beast Boy played with his Jenga blocks and started to annoy Reyes. Reyes asked him to play with it anywhere else. Damian Wayne approached Reyes and acknowledged it was a mistake to challenge him without knowing the full capacity of his Scarab. He promised it wouldn't happen again then walked away. Reyes was shocked he just apologized. Beast Boy teased that Robin liked him

Starfire takes the team to the carnival in hopes that it will help the Titans become more familiar with each other. During a night of mandatory fun at the carnival, Garfield Logan and Jaime Reyes battled each other in a dance off video game. Logan won. Reyes offered free popcorn to anyone who could beat him. Wayne took up the challenge despite never dancing before and won. Reyes congratulated him.

During their time, Trigon's the Corruptors, demon progeny attack Raven, endangering civilians leading the Teen Titans to suit up and fight off the demons. After defeating the demons, Raven reveals her past, that her mother was a member of a cult where she was married by Trigon in human form. On the night they were to consummate their marriage, Trigon revealed his true form and presumingly raped her, leading to the birth of Raven. Raven's mother flee to Azarath where she grew up. Wanting to learn more about her father, she uses the same ritual used by the cult to summon him and thus he destroyed all of Azarath, killing everyone except Raven and took her to his dimension. Trigon tried to use her to come to Earth and conquer it till uses a magical crystal to trap him, Raven then teleports the Titans back to the Tower.

The Justice League (minus Superman, Green Lantern, Aquaman Shazam Martian Manhunter and Hawkman) boom tube there as well to take Raven as she seems to be connected to the supernatural events that has happened lately such as Superman and Weather Wizard's demonic possessions. Trigon then has corrupters possess the Justice League, but Batman saved himself by injecting himself with nerve toxin for Bane, forcing the corrupter out of him. The now possessed Justice League battle the Titans. Blue Beetle and Cyborg traded shots with each other. Beetle survived taking a point blank blast from Cyborg. The League defeated them easily and force Raven to surrender herself to Trigon by threatening their lives. As Raven and the League entered a portal, Beetle shot a tiny device on the base of Cyborg's neck and overloaded his systems causing the corrupter to instantly leave Cyborg's body. Cyborg later regains consciousness and Robin reveals he placed a tracer on Raven, he then opened a boom tube so the team could travel to the Middle East.

When they arrive, the possessed Superman towards them. They opened fire on him until he was close enough then Robin stabbed him with Shard of Kryptonite. Superman frees The Flash and Wonder Woman and they save Raven, but too late Trigon was able to pass through the magical shrine that possessed Superman salvaged form the Earth and attacks the heroes. Raven then states that they must trap Trigon within the magical crystal that she used to Trigon before so along with Cyborg, they take a portal to Hell. They went to Trigon's realm to retrieve the crystal that he was imprisoned in but they had to fight off a legion of demon spawn and the Corruptors. Blue Beetle was constricted by spawn but Beast Boy, in a hell beast form, rescued him and ripped the spawn apart

After Raven uses the crystal to trap Trigon once again, she insisted on staying in Hell to keep an eye on Trigon, but the Titans manage to convince her that home is where she belongs.After Raven trapped Trigon again, Blue Beetle thanked Cyborg for his help and remarked it was nice for once to have a big gun around. 10 days later, the Titans are congratulated by the Justice League for saving the world and them then Cyborg shows up with pizza and the Titans eat in celebration.

Blue Beetle makes an appearance during the Justice League's meeting to wage war on Darkseid, as the Teen Titans listen in on the meeting via telecommunication at Titans Tower. A few days later, Earth is raided by an army of Paradooms, genetic hybrids of Parademons and Doomsday, and Blue Beetle is killed along with the rest of his team, except for Damian Wayne and Raven, as a Paradoom knocks him down and violently beats him. 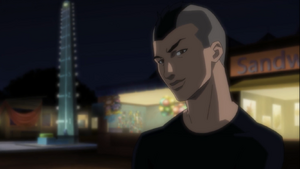 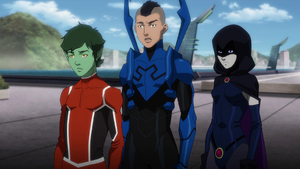 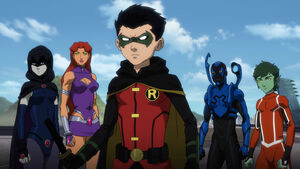 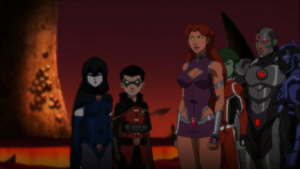