Heroes Wiki
Register
Don't have an account?
Sign In
Advertisement
in: Articles under construction, Outdated Articles, Male,
and 15 more

NOTE: This article is about the son of the original incarnation. For his father and the original mainstream version, see Blue Falcon.

Taking over from his father.

Brian Crown, better known as Blue Falcon, is the tritagonist of the 2020 Warner Bros. animated film Scoob!. He is the current beholder of the Blue Falcon mantle, taking over from his father (who is retired) and recruits Shaggy and Scooby to stop Dick Dastardly from stealing the three skulls of Cerberus.

Brian is voiced by Mark Wahlberg, who also portrays Cade Yeager in Transformers: Age of Extinction and Transformers: The Last Knight, Detective Terry Hoitz in The Other Guys, Sean Dignam in The Departed, Bob Swagger in Shooter, Chris Farraday in Contraband, Billy Taggart in Broken City, Max Payne in the film of the same name, John Bennett in Ted, and Victor Sullivan in Uncharted.

Blue Falcon has good intentions and is friendly, although he has a deep sense of self-importance and is often very conceded. He is not very bright when it comes to plan-making and who he should trust. He is weighed down by the stress of trying to be like his father although, by the end of the film, he learns to be his own person and trust in his abilities.

Blue Falcon introduced himself to Scooby and Shaggy in a grand appearance. The two are confused, as he looks very different. Dynomutt appears and reveals that he is actually the original Blue Falcon's son, Brian, and that he has taken over the position of being a superhero. Brian, now the new Blue Falcon, explains that his dad is now in a retirement home in Palm Beach. However, Dick Dastardly is revealed to be nearby and chases after the Falcon Fury, although it managed to escape. When Dynomutt confirms that Scooby and Shaggy are needed alive, Blue Falcon then says that they are important, though it's not known why, and that he'll need their help on their mission.

Blue Falcon, Scooby, Dee Dee, and Dynomutt arrive at Messick Mountain and head underground until they reach a hidden Mesozoic island. They find the last skull being guarded by Captain Caveman. Following a short battle, Fred and Shaggy arrive, but Fred is revealed to be Dick Dastardly in disguise as he steals the last skull. His robots throw the real Fred, Daphne, and Velma out of his airship and destroys the Falcon Fury before capturing Scooby and taking him to Athens. Blue Falcon and Fred argue while Daphne, Velma, Dee Dee, and Dynomutt try to break them up, but Shaggy stops their argument and takes the blame for Scooby's capture after letting his jealousy strain their friendship. 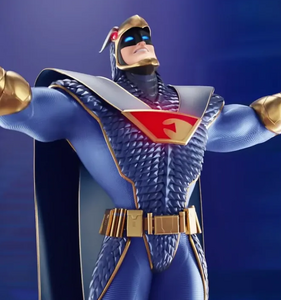 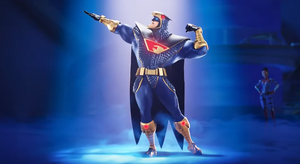