Blue Flicky has a blue skin, yellow peak and foots and big eyes

Blue Flicky had to look for the chirps that were lost in a building and lead them to an elevator, but she had to face the Tigers who wanted to eat them, also some iguanas called Iggy, to defeat them, she had to throw some object that was in his way and throw them. 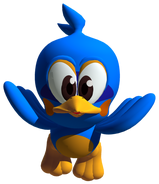 Mega Drive Longplay 044 Flicky
Add a photo to this gallery
Retrieved from "https://hero.fandom.com/wiki/Blue_Flicky?oldid=1802370"
Community content is available under CC-BY-SA unless otherwise noted.