Adam: Legend of the Blue Marvel #1

Being with his children.

Protect the Galaxy and his family.

Blue Marvel (real name Adam Bernard Brashear) is a fictional character and superhero appearing in comic books published by Marvel Comics, being the titular character of the same series and a supporting character in the Avengers and Mighty Avengers comics.

He was a child prodigy and Korean War veteran who later worked on Project: Perseus, and gained his powers from negative matter. Adam became the superhero named "Blue Marvel", becoming an ally of the Avengers and the enemy of his former friend, Anti-Man. He also became a member of the Ultimates, Mighty Avengers, Scientist's Guild, and the Avenger's World.

He was created by Kevin Grevioux and Mat Broome, and first appeared in Adam: Legend of the Blue Marvel # 1 in November of 2008.

Due to his degree in engineering and physics, Adam would become the lead scientist on Project: Perseus, a project created to find a way to harness negative matter. While testing the reactor with Conner, it exploded, causing Brasher and Sims to suffer from mutagenic radiation as a result of the explosion. Adam survived the incident, with his body becoming stable and gifting him with superhuman abilities. Sims would be forced to live in anti-matter due to his body becoming unstable, and he would eventually snap due to learning of his brother's death and the discrimination Adam would later face.

Wanting to use his powers for good, Brasher would don the name "Blue Marvel", and would wear a helmet to prevent his identity from being exposed. Once Adam was discovered to be an African-American by the public in the 1960s, many refused to believe there to be a black superhero, and decided to retire after being asked by President John F. Kennedy. Taking his last mission, he was considered dead, but this was a cover by the U.S. Government so he could be monitored. In addition, the government sent S.H.I.E.L.D. agent Marlene Frazier to monitor him under the alias Candance. Adam and Marlene fell in love, and eventually married and had three children, and moved to Maryland.

Around the 1970s, Adam joined the Mighty Avengers, a group created by Blade to stop the Deathwalkers. Once succeeded, the team disbanded and parted ways. Adam would later learn that Conner survived and became a radical villain named Anti-Man, who wanted to destroy racism across the world. After Anti-Man defeated the Avengers, Iron Man and Reed Richards asked Adam for help, who did so after the death of his wife by Conner. Adam defeated Anti-Man, taking him to the edge of the ionosphere and took his energy, causing his collapse. After having a talk with Uatu the Watcher, Blue Marvel aided Winter Guard against King Hyperion, and later met Spectrum and Luke Cage. Blue Marvel would come into conflict with the Avengers when his son decided to open a portal to the negative zone, and fought against the Beyond Corporation.

His son was trapped in the negative zone, but Adam and Max decided not to give up and keep looking for him. Blue Marvel would later join the Ultimates, which would later be disbanded after the second civil war, but would assemble when Galactus asked for help. Brasher would later become a member of the Scientist's Guild (also known as the Three X's) alongside Night Thrasher to investigate the man who was pretending to be the Masked Raider. The superhero was later tasked to apprehend Doctor Doom with H.E.R.B.I.E., but Brasher would have to battle Silver Sable, Kang the Conqueror and Victorious at the house of Fruzsina Markovich. 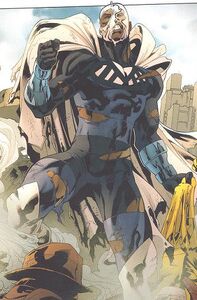 Blue Marvel's first appearance, with his face being shown due to his damaged mask. 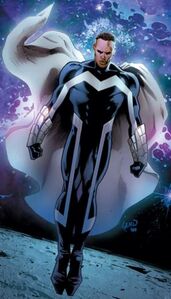 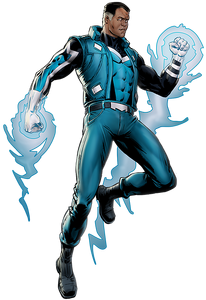 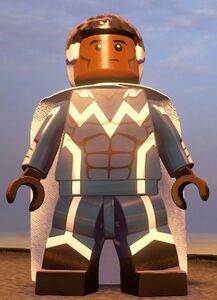