Gary Oak (in the anime)

Picking on anyone (formerly)

Become the Indigo Plateau Champion (succeeded, but later, he was defeated by the player)

Blue Oak (Green Okido in Japan) is the rival character in the Generation I games and FireRed and LeafGreen. He is the grandson of Professor Oak and the rival of Red or Leaf.

He wears a long purple shirt, dark gray pants, a yin and yang necklace, and brown boots with black straps encircling them.

He wears a short-sleeved black shirt and purple cargo pants and black shoes. He also carries a light blue pack around his waist, and has purple bands around his wrists.

He is slightly taller and more mature-looking. He wears a black leather jacket, a black belt around his waist, khaki cargo pants, and black shoes.

He wears a black short-sleeved shirt with buttons, green pants and shoes. He also wears a pair of sunglasses and carries a gray backpack.

In Generation I, he is mostly an arrogant, cocky, rude and unfriendly rival who can't tolerate being defeated. When he bids farewell, he says this in a disrespectful manner, often saying "Smell ya later!" as he walks away. His personality is not really changed in FireRed & LeafGreen.

However, in HeartGold & SoulSilver, he became more mature and became a much kinder person.

Generation I / FireRed and LeafGreen

After encountering the player several times, Blue defeats the Elite Four and becomes the champion, but is defeated by the player. When Professor Oak shows up, he tells Blue that the reason why he lost is because he forgot to treat his Pokémon with love and care. After this, Blue can be found in the Indigo Plateau, where he will fight against the player after they have defeated the Elite Four.

Three years later, Blue is revealed to be the new Gym Leader of Viridian City, replacing Giovanni. When the player (Ethan, Kris, or Lyra) first meets him in Cinnabar Island, he mentions to that three years ago, he was the champion of the Indigo Plateau and that his reign was short-lived as he lost to Red. After that, he can be challenged at the Viridian Gym, and if he is defeated, he will give the player the Earth Badge.

He appears in the Pokémon World Tournament as Kanto's Champion and where he is matched up against the player to battle in the Champions Tournament.

He can be found at the Battle Tree, where the player can fight against him and Red.

Blue appears various times in the game, but your first encounter with him is after defeating Brock. You encounter him in Silph Co in which you battle him. He is in professor oak’s lab to give you the ability to mega evolve. He can be battled on Viridian City Gym after defeating the champion the first time, once per day.

Blue has a counterpart in the anime named Gary Oak (Shigeru Okido in Japan), who is the rival of Ash Ketchum (Red's counterpart). Gary and Blue have a lot of similarities between each other: both Blue and Gary have a grandfather named Professor Oak and who is the professor, both Blue and Gary were rude and cocky rivals who always insulted their respective rivals (Red \ Leaf for Blue and Ash for Gary) at any opportunity, and both were defeated by their rivals in their final battle.

Gary makes his debut in "Pokémon - I Choose You!" where he is seen with a group of cheerleaders who cheer for him. Gary and Ash become rivals, but they do not fight each other until "The Ties That Bind". In that episode, it was revealed that Gary chose a Squirtle and that he already evolved it into a Blastoise. After Gary was defeated by Ash, he retires from being a trainer and starts to work as a Pokémon researcher.

Gary is also seen in the Diamond & Pearl series, where he has traveled to Sinnoh, and now he currently works for Professor Rowan.

Blue has a counterpart who shares his name and personality who appears in Pokémon Origins. Like in the games, he is the grandson of Professor Oak, the rival of Red, and the champion of the Indigo Plateau, until he was defeated by Red. He chose a Squirtle as his starter after Red chose a Charmander as his starter.

Like his game counterpart in Generation I \ FireRed & LeafGreen (on which Pokémon Origins is based on), he is a rude and cocky rival who always insulted Red at any opportunity, but unlike Gary Oak, he does not seem to be friendly to Red after his defeat.

Blue has a counterpart in the manga who shares his name. Like his game counterpart, Blue in the manga also has a grandfather named Professor Oak who is the Pokémon Professor and an older sister named Daisy. He is the rival of Red, and the current Gym Leader of Viridian City.

Blue with his Eevee in Pokémon Yellow 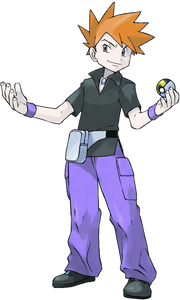 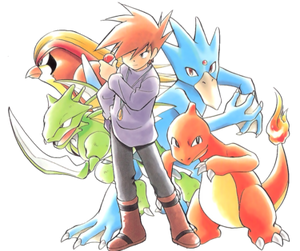 Blue with his team in the Red, Green & Blue arc 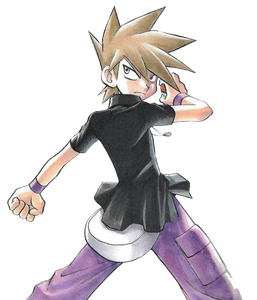 Blue in the FireRed & LeafGreen arc