Blue Toad appears as the fourth playable character in New Super Mario Bros. Wii. He first is seen at Princess Peachs Castle where he can be seen enjoying the festivities for Princess Peach's birthday party along with fellow guests: Mario, Luigi, and Yellow Toad. However, the party was soon interrupted by the Koopalings and Bowser Jr. who arrive with a disguise as a large birthday cake and using this disguise, they had managed to fool the heroes and kidnap Peach. This starts Blue Toad's adventure as he quickly follows the Mario Bros. and Yellow Toad to stop the Koopalings.

Unlike the other Toads, Blue Toad is shown to be extremely brave due to his loyatly to the bros. He ventures though 8 worlds to save peach battling the koopalings Kamek and Bowser. Jr along the way. at world 8 they meet Bowser and try to fight him but kamek makes him gaint and chases him. After finding the button they stop bowser and save peach.

Blue Toad makes his next appearance in the Wii U title, New Super Mario Bros. U. He once again joins the Mario bros and yellow toad to save peach.

Within the game's introduction sequence, Blue toad yellow toad and the bros are having lunch with peach but the moment gets interrupted by bowsers robot arm.

Bowser used the mechanical arm to scoop up Blue Toad and his friends and threw the heroes far across the Mushroom Kingdom. Upon crashing into the Acorn Tree consisting of Super Acorns and falling back to the ground (, the four heroes soon get up and see Peach's Castle getting invaded by Bowser's forces in the far distance. Deciding to take action, Blue Toad and his friends run across the plains to try and stop bowser. Eventully they meet Nabit and get their stuff back as well as save peach from bowser

Blue Toad returns as a playable character within the multiplayer mode of the expansion pack game New Super Luigi U. Very much like in New Super Mario Bros. U, Blue Toad journeys through the Mushroom Kingdom to save Princess Peach once again along with the help of Luigi, Yellow Toad, and Nabbit.

Blue Toad makes a later reappearance in Mario Party 9 as the host of the Minigame Mode. Being the signature host of this mode, Blue Toad often rewards the player upon the success and completion of the minigames being featured. Blue Toad also presents the instructions and helpful hints to the players for the various minigames. He also cheers for the player

In the High Rollers mode (of the Minigame Mode), Blue Toad presents himself with his very own block (with his own emblem on it). In the ending of the mode, Blue Toad along with Yellow Toad and Green Toad allow the winner to ride into their Hot-air balloon to celebrate the character's victory.

Blue Toad appears in Mario Party: Island Tour. He appears to exchange collectibles to the player for Mario Party Points. He also participates in some of the minigame demos.

Blue Toad returns in Mario Party 10 as the host where is role is the same as before.

Blue Toad and the other heroes of New Super Mario Bros. Wii were shown as some of the featured characters in the Nintendo 3DS tech demo. He was riding a Pink Yoshi, similarly to the game's box art. Eventually, this tech demo screen featuring Blue Toad and his friends was later obtainable as a puzzle in the Puzzle Swap mode in the StreetPass Mii Plaza.

In New Super Mario Bros. Wii, Blue Toad is shown as a courageous character, who is able to venture alongside the Mario Bros. on their dangerous mission to save Princess Peach from Bowser and his minions; a force that most Toads tend to be afraid of. He is also shown to be kind and compassionate as seen in the ending of the game where he happily invites Luigi to ride in his and Yellow Toad's hot air balloon after he had been abandoned by Mario and Peach.

In, Mario Party 9 Blue Toad is an enthusiastic host shown through his positive attitude. He occasionally makes mistakes as a host, although he often quickly corrects himself as well to keep the games going.

Throughout the New Super Mario Bros. games, Blue Toad plays similarly to Mario. While possessing the same jumps as Mario, he is also shown to use similar techniques as well including the Wall Jump and Ground Pound. He is also able to maximize his jumps by using a Spin Jump. Unlike the Mario Bros. however, Blue Toad (along with Yellow Toad) are shown to have a unique triple jump; the two Toads perform a high jump similar to a cartwheel while facing one side of the screen. Blue Toad is also shown to be quite strong, being able to carry items much larger than his own size (such as barrels). He is also capable of picking up, carrying and throwing other characters (such as Mario) with ease. All of these traits are similar to not give players advantages over each other. In New Super Luigi U, Blue Toad has the ability to perform a scuttle jump much like Luigi.

Blue Toad is also capable of using the various power-ups in the game allowing him to use their special effects and achieve different forms (such as Propeller Blue Toad if he was to touch a Propeller Mushroom). Much like the other characters playable in New Super Mario Bros. Wii, he is shown to be skilled in riding Yoshi. 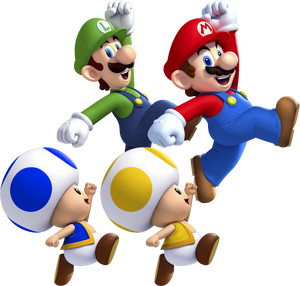 Retrieved from "https://hero.fandom.com/wiki/Blue_Toad?oldid=2062092"
Community content is available under CC-BY-SA unless otherwise noted.