In Super Mario World, any Koopa Shell held by a Blue Yoshi will give him the ability to fly; the abilities gained from holding Yellow and Red shells are also granted.

If a Yoshi of any color manages to find Yoshi's Wings, it will turn into a Blue Yoshi and fly up to a bonus stage. After Mario and the now-Blue Yoshi complete the bonus stage, the wings will be lost, though the Blue Yoshi will retain its new coloration.

Additionally, a Baby Blue Yoshi can be found in the underwater Star World 2 stage.

In the Game Boy Advance remake, Super Mario Advance 2: Super Mario World, a Yoshi will not change its color upon finding Yoshi's Wings. Also, once the Baby Blue Yoshi from Star World is found, Blue Yoshis can be found in lieu of where Green Yoshis normally are if Cape Mario hits a ? Block containing a Yoshi Egg.

In Super Mario 64 DS, the third player in VS. Mode controls a Blue Yoshi. Blue Yoshis don't have any unique ability in the game, as all Yoshis have the same abilities.

A Blue Yoshi was set to appear in New Super Mario Bros. Wii but he was scrapped and then replaced by a Light Blue Yoshi.

Though general Blue Yoshis don't appear in New Super Mario Bros. U, blue-colored Baby Yoshis known as Bubble Baby Yoshis do. They have the ability to spit Bubbles at enemies, turning them into Coins, a Power-Up or a 1-Up Mushroom.

In Super Mario World 2: Yoshi's Island, a Blue Yoshi is playable on the Castle of every world, except for level 6-8, King Bowser's Castle; in which a Green Yoshi takes his place. This makes Blue Yoshis the least-used of the Yoshis.

A young Blue Yoshi appears as a playable character in Yoshi's Story. His favorite fruit is Grapes.

Blue Yoshis are also present (and live) in the Yoshi's Village on Lavalava Island, featured in the first game of the series.

In the sequel, one of the Yoshi Kid's colors is blue. The Blue Yoshi Kid will be obtained if the amount of time that passes between the point where its egg joins Mario's party atop the hot dog stand to when Mario eventually meets the newborn dinosaur after running from the Armored Harriers is between nine and eleven minutes.

In Mario Power Tennis, Yoshi can change colors every time he performs a Rolling Egg Return, provided the player has completed the Flower Cup with any character. One of the colors that Yoshi can turn into is blue.

In Mario Super Sluggers, a Blue Yoshi makes its baseball debut as a color variant for Yoshi. In Challenge Mode, a Blue Yoshi can be found in Yoshi Park. It gives the player several questions in order to figure out the combination for the gate. Afterwards correctly answering the questions, it will join Mario on his quest. The Blue Yoshi has the weakest batting abilities among all Yoshis, but that is compensated by its pitching, where it ranks first among the Yoshis (being tied with the team captain Yoshi).

A Blue Yoshi also appears in Mario Sports Mix as a non-playable character. It appears in the Dodgeball game, where it assists the blue team on the sidelines. Its red team counterpart is a Red Yoshi.

In Mario Kart 8, Blue Yoshi appears as an alternate skin for Yoshi. It is available though purchasing both the Legend of Zelda and Animal Crossing DLC packs.

In Super Mario World, Blue Yoshis had dark blue skin, orange gloves, brown shoes and a brown saddle. For the sequel, Blue Yoshis' look remained near the same but the shoes were recolored purple while the saddle was recolored red. The shoes' color was changed again for the Game Boy Advance port, this time to pink.

From Yoshi's Story and on, Blue Yoshis have appeared with magenta shoes and a red saddle. In the "Yoshi's Island"'s sequel, Yoshi's Island DS, and Yoshi Touch & Go, the skin tone for Blue Yoshis was darkened. 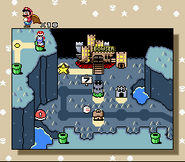