Blumfump is a mermaid-like alien who recruited Lance's help to save his underwater home from brainwashing.

He was voiced by the King of Parody, Weird Al Yankovic.

He, Plaxum and Swirn kidnapped Lance from Queen Luxia and convinced him that their society was being brainwashed. Later, Lance and Hunk discovered that it was in fact a giant, plant-like worm monster hiding in the Baku garden that was behind the mind control. Once the Paladins defeated the monster, Queen Luxia asked Blumpfump, Plaxum, and Swirn to be become her advisors. 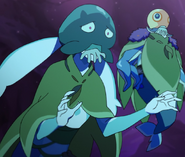 Retrieved from "https://hero.fandom.com/wiki/Blumfump?oldid=1754498"
Community content is available under CC-BY-SA unless otherwise noted.