Blurr is a major character in Transformers Animated. He is an Autobot who can transform into a super-fast concept car.

He was voiced by John Moschitta Jr., who also voices his Generation 1 counterpart.

He is an intelligence agent in the Cybertron Elite Guard, Blurr tends to barrel ahead with whatever he's doing and simply expects everyone else to keep pace... be it on a mission or in simple conversation. His motor-mouth and penchant for tangents tend to leave others in the dust, forcing them to ask him to repeat things. He is UBER fast.

Blurr never stops moving. It's a habit he's gained over centuries of working as an undercover agent for the Autobot Elite Guard. Constant mobility is the best way to avoid detection by Decepticon agents. He is used to remaining in vehicle mode for months or years at a time – as long as it takes to complete his mission, learn what he needs to know, and escape. Unfortunately, because he spends so much time alone, he's not really used to talking so others can understand him.

Blurr initially became known to the Autobots through his participation in Master Disaster's Street Demon races. This was because Master Disaster manipulated him using a remote control that contained an AllSpark fragment.  Blurr proved impossible to beat on the race course; under Master Disaster's control, Blurr used aggressive tactics and sped past Bumblebee twice, even though the yellow Autobot was using his rocket boosters.

Later, the AllSpark Key detected the fragment, so Sari stole the remote control to investigate it, which apparently broke Master Disaster's control over Blurr. When Blitzwing was about to attack Bumblebee, Blurr charged off a bridge and played a mid-air game of chicken with Blitzwing, causing the Decepticon to veer off and crash into a skyscraper. Later that night, Bumblebee was on the roof of the Autobots' factory base when he spotted Blurr driving down a nearby highway past the building. Bee called out a thank you, but Blurr gave no response.

Blurr intercepted a transmission between Megatron and a double agent on Cybertron revealing that Bulkhead was the best Space Bridge technician in the entire galaxy, and would thus be a target for kidnapping. Blurr sped off to try to stop Megatron, but was instead stopped by Bumblebee. The yellow bot chased him around for a while, until he finally knocked Blurr off the road. This angered Blurr, so he transformed into robot mode, introduced himself and his mission, and gave Bumblebee the chewing out of a lifetime, all in about thirty seconds. Bumblebee missed everything he said past the first sentence. Later at the Autobot base, Blurr introduced himself and explained his mission to rest the entire Autobot crew, minus Bulkhead. They still had trouble understanding him, but were able to make out the fact that Bulkhead was an expert and that Professor Isaac Sumdac had aided Megatron in building a space bridge.

Blurr led Bumblebee, Optimus Prime, and Prowl to Megatron's base. They had a brief encounter with Blitzwing and Lugnut, whom Blurr quickly caught in stasis cuffs. After watching, Bumblebee reluctantly admitted that he was no longer the fastest thing on wheels. The Autobots managed to reach Megatron's throne room, but Bumblebee and Blurr held prisoner by Scrapper while Optimus and Prowl were caught in Mixmaster's cement. To their surprise, Starscream arrived as well with a quintet of clones: the cowardly Skywarp, the egomaniac Thundercracker, the suckup Sunstorm, the lair Ramjet, and the femmbot Slipstream.

After escaping from Scrapper, Blurr stasis-cuffed Skywarp only for the two of them to get caught in cement courtesy of Thundercracker, who also sent them tumbling into the space bridge. Bulkhead attempted to recall them, but explained that the targeting coordinates of the bridge were never set, meaning that they could have been sent anywhere in the galaxy.

Despite having to put up with Skywarp's complaints, Blurr was able to convince at least Thundercracker of using his sonic powers to dissolve the cement. While the stasis-cuffed Skywarp was left behind, Blurr raced off to make his way back to Cybertron while being pursued by Thundercracker. After jumping off the Starscream clone's face, causing him to be blown away into deep space, Blurr manage to run across the galaxy to get back to Cybertron and reported his finding to Longarm Prime.

However, this proved to be a tragic mistake because Longarm was in fact the very double agent he was talking about: a Decepticon named Shockwave. Blurr sped away from the real traitor only to get trapped and crushed into a cube (much to the dismay of his newly acquired fans) by Shockwave. After a few helpless whimpers and a terrified expression, Blurr was no more. Cliffjumper then unknowingly threw away the cube of what remained of him due to Longarm calling it "sensitive material".

Fortunately, that was not the last of Blurr, for a now teenaged Sari stumbled down the same compactor chute during a field trip to The Metroplex long after Shockwave was exposed as a double agent and Megatron had been brought back to Cybertron by Optimus Prime's crew. Her residual AllSpark energy was able to reawaken him, though it also inadvertently unleashed Kremzeek, a Decepticon weapon from the Great War. Teaming up with Sari and Arcee, Blurr used his speed to get them to Fortress Maximus ahead of the creature and save the day. They most likely filled Cliffjumper in on the truth on the Blurr cube, hence why he was seen holding it during the Stunticons' show. Afterwards, Optimus Prime and Jazz used the AllSpark Matrix to restore Blurr to his normal body.

Blurr is fast. Incredibly fast. So fast he even speaks fast. In vehicle mode, he can outpace Bumblebee even with his turbo boosters. In robot mode, he can move fast enough to run up walls, and move like a blue blur around his foes. The fin on his head is not for decoration alone, either - in line with his role as an intelligence officer, he can use it to pick up all manner of signals. 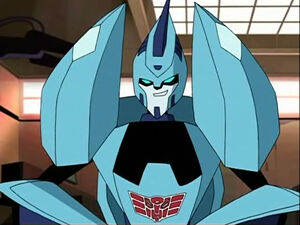 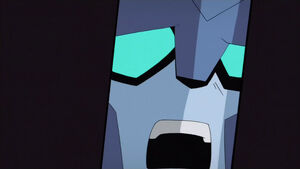 Blurr getting compacted by Shockwave. 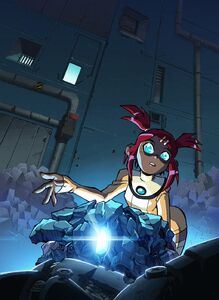 The compacted Blurr being discovered and reawakened by Sari Sumdac. 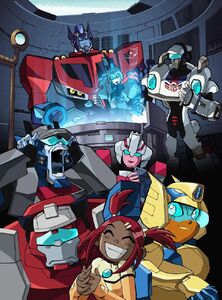 Blurr being restored by Optimus and Jazz after Sari saves Cybertron from Kremzeek.