She was a member of the Mandalorian terrorist organization Death Watch during the Clone Wars which sought to revitalize Mandalore's warrior past. Bo-Katan was the sister of Duchess Satine Kryze, the pacifistic ruler of Mandalore whom Death Watch were attempting to overthrow.

A large portion of Death Watch known as the Death Watch loyalists believed that an outsider such as Maul should never sit on the throne of Mandalore. Amongst those who opposed Maul's claim to the throne was Bo-Katan, who acted as the leader of the new Mandalorian resistance. Maul later killed Satine to torment Jedi Master Obi-Wan Kenobi, whom had held a special relationship with the Duchess.

Eventually, Bo-Katan enlisted the support of former Jedi Padawan Ahsoka Tano and the Galactic Republic by extension. The Grand Army of the Republic and the Death Watch loyalists launched a joint siege on the Mandalorian capital of Sundari. Maul's forces were defeated and the Sith lord himself was captured. In the aftermath, Bo-Katan was named Regent of Mandalore by the Republic.

Unfortunately, Bo-Katan's position didn't last long, as she was ousted once the Republic was reformed into the Galactic Empire. Kryze spent the next eighteen years rebelling against the Imperial occupation of Mandalore. Roughly one year before the destruction of the First Death Star, Bo-Katan encountered a Mandalorian named Sabine Wren who wielded the Darksaber.

The Darksaber was an ancient blade-bladed lightsaber that symbolized leadership within the Mandalorian culture. Sabine wanted Bo-Katan to wield the Darksaber, however, racked by the guilt of her previous failings, Bo-Katan initially refused the blade, but ultimately accepted the weapon upon Sabine's insistence. With the Darksaber in hand, Bo-Katan was able to unite the Mandalorian clans against the Empire.

She was voiced by Katee Sackhoff, who famously portrayed Kara "Starbuck" Thrace in Battlestar Galactica.

During the time of the Clone Wars, Bo-Katan served as Pre Vizsla’s trusted right hand in Death Watch. The militaristic splinter group sought to restore Mandalore’s warrior past, an ideal which Bo-Katan held—even if it meant ousting her sister, Duchess Satine, from office.

While Bo-Katan was loyal to Vizsla, she had reservations concerning Death Watch’s alliance with two beings they discovered in an escape pod: the Sith brothers Darth Maul and Savage Opress. Having found the Sith after they were soundly defeated at the hands of Obi-Wan Kenobi, Bo-Katan questioned the wisdom of joining forces with beings she deemed “no better than Jedi.” Maul Force choked her for the remark, but she remained strong in her convictions.

Following the Sith’s lead in a scheme to take over Mandalore, Death Watch became part of the Shadow Collective: an alliance with criminal organizations including the Pyke Syndicate, Black Sun, and the Hutt Clan. Vizsla, however, informed Bo-Katan that once the Shadow Collective assumed control of the planet, he would betray the Sith and claim the throne. As orchestrated by Maul, the underworld gangsters launched an attack on the Mandalorian capital city of Sundari. When all seemed lost, Death Watch swooped in to save the day and arrested Duchess Satine. With the staged battle complete and Mandalore won, Vizsla turned on the Sith. He jailed Maul and Opress but was challenged to a death duel by Maul. After a vicious battle, Maul dispatched the Death Watch leader with a violent beheading; Bo-Katan refused to serve a Sith and freed her sister from prison. Satine was recaptured, however, as part of a larger plot to lure Obi-Wan Kenobi to Mandalore. Finally, Maul had his revenge against his nemesis and killed Satine before the Jedi’s eyes. Bo-Katan, while devastated at the loss of her sister, helped Obi-Wan escape from Maul’s clutches. She vowed that Mandalore would survive this terrible turn of events.

Following the Empire's occupation of Mandalore, Bo-Katan refused to surrender to the Emperor's tyranny. Years later, she joined with rebel Sabine Wren to help destroy an Imperial weapon that targeted Mandalorian armor. After their victory, Sabine gifted the Darksaber to Bo-Katan. She accepted, finally uniting Mandalore. 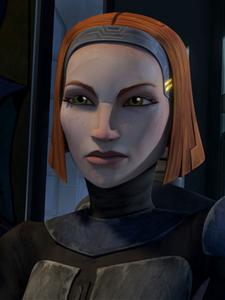 Bo-Katan as she appeared in Star Wars: The Clone Wars. 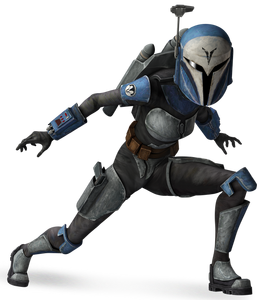 Bo-Katan in her armor. 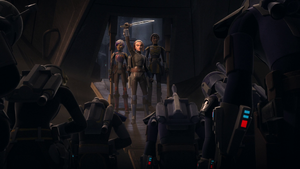 Kryze takes up the darksaber.
Add a photo to this gallery

Retrieved from "https://hero.fandom.com/wiki/Bo-Katan_Kryze?oldid=1846945"
Community content is available under CC-BY-SA unless otherwise noted.