belly being rub by Mary

To join the royal caravan (formerly)
To follow Star (succeeded)

Boaz is the main protagonist of the Sony Animated movie The Star.

He is voiced by Steven Yeun. who also voice as Keith from Voltron: Legendary Defender series and Wan from The Legend of Korra.

He is a small brown 6 year old donkey with brown eyes, and white legs.

He is brave, confident, stubborn, cowardly, adorable, cute, sweet, and strong. He cares about Mary and doesn't like Joseph at first.

Six months later, he is tired of milling wheat and wishes to join a traveling caravan so that he may feel important. His father helps him escape the miller who owns them and he ends up with an injured ankle at the house of 12 year old Mary and 17 year old Joseph who just had their wedding dinner. Mary takes the donkey in and names him Boaz, Bo for short, and reveals to Joseph her pregnant tummy, with Joseph accepting Mary's situation after praying to God. During this time, Bo and his 7 year old dove friend Dave, plot to escape despite Mary's kindness, but end up staying three more months.

Bo and Dave try another escape, but are confronted by 4 year old Thaddeus and 5 year old Rufus, who knew of the home by interrogating 12 year old Abby. After learning that Mary and Joseph are not home, the soldier and his dogs leave to look for them. Feeling guilty, Bo decides to warn them with Dave joining him. Along the way they meet a 9 year old friendly sheep named Ruth who left her flock when she saw the star but the others refused to follow her. They catch up to Mary and Joseph in time to warn them, and hide them in a market place where the soldier ties up his dogs. Bo releases the cart Mary and Joseph were using to roll down and cause a chain reaction that knocks the soldier down a well. However, he creates severe damage to the market in the process, and Joseph instead accuses Bo as he was unaware of the danger. Then Bo gets into an argument with Ruth and leaves, weakened. He suddenly sees the Royal Caravan but instead he says Mary was more important. Bo apologizes to Ruth and she deeply forgives him and they help carry Mary and Joseph's bags. But a scary moment happens when Mary's baby was coming NOW! Joseph asks Bo if he can carry her on his back to Bethlehem and Bo grunts in agreement.

Bo becomes a hero by carrying Mary on his back to Bethlehem. After Mary and Joseph go in an inn but suddenly all the inns are taken and they have nowhere to , Bo gets caught by The Miller and gets chained up in a stable with a 16 year old goat, a 29 year old cow, and a 20 year old horse named Zach, Edith, and Leah. Bo realizes the star had been guiding him to the stable where it was shining down directly on a manger.

He suddenly realizes that he needs to go to Mary and Joseph and once he is free, he finds Mary in labor and Joseph concerned. Bo once again carries Mary, whimpering, on his back to the stable where Zach, Edith, and Leah were preparing for the baby's birth. but Joseph quickly rejects this idea saying that Mary and him can't have the baby there and they would need stronger bedding and suddenly Mary tells him she's ready to have the Son of God right NOW! Joseph pus his expectant wife on a bed of hay and Bo thanks the stable animals. Then he runs into Thaddeus and Rufus who want to eat him and luckily, Ruth, Dave the camels, Felix, Cyrus, and Deborah come to the rescue until the Hunter, Thaddeus and Rufus almost fall off the cliff and Bo saves the dogs only to hear the sound of a newborn baby crying. The Hunter falls to his death and Bo rescues Thaddeus and Rufus and then the animals go to the manger where they hear the crying again and realize Mary had the baby! Bo was so excited but the baby's tiny hands brushed up against his snout and Bo gets startled but Joseph tells him "It's okay, Bo." and lies the infant in the hay. Thaddeus and Rufus become nicer and The three wise men had prepared the gifts for the newborn king and asked Mary what was his name. Mary replies that the baby's name is Jesus. When all the animals bow toward Baby Jesus, Bo realizes Mary was carrying a king in her tummy. He bows towards Jesus and Jesus begins to cry and Mary comforts him and then adopts Bo as the Holy Family's pet donkey, Ruth as the Holy Family's pet sheep, and Dave becomes the Holy family's pet dove where they all raise Jesus as a happy little boy. 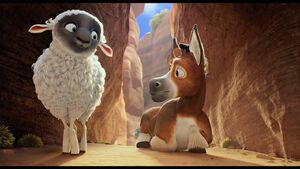 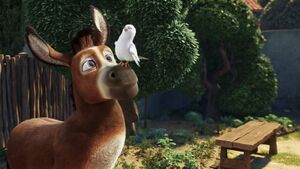 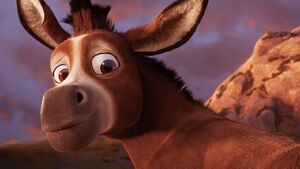 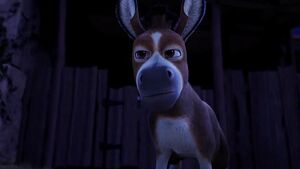 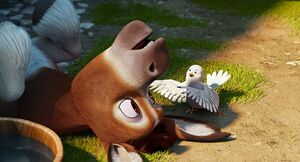 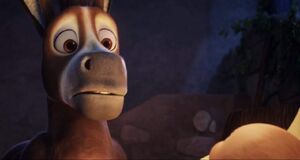 Bo offering his friendship to Thaddeus and Rufus when they meet baby Jesus. 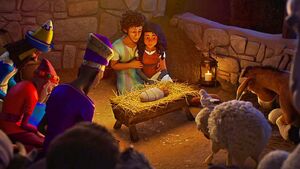 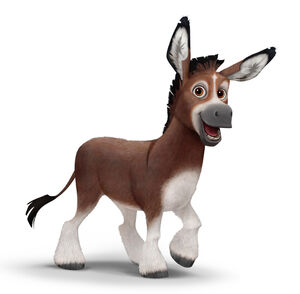 Retrieved from "https://hero.fandom.com/wiki/Bo?oldid=1376769"
Community content is available under CC-BY-SA unless otherwise noted.