Transformations and his powers:

Hanging out with his friends
Helping his grandfather
Researching Power Spheres

Defeat Adu Du from his all evil threat

BoBoiBoy was visiting his grandfather Tok Aba in Rintis Island, to spend his summer vacation. There he met his new friends that become his allies, Yaya (Hanna in dub version), Ying, and Gopal. During his arrival, he also witnessed some strange robot (later revealed to be Probe) stole some sample of Tok Aba's cocoa, and BoBoiBoy goes to followed him that led to his spaceship. After took away the stolen chocolate and barely escaped from Adu Du's clutches, he unknowingly had newly awakened Power Sphere, Ochobot, followed him under the guise of his soccer ball. He then told his near-death experience to his friends, but none of them believed him.

In his home, Ochobot shed his disguise and he gave BoBoiBoy the 3 element powers; lightning, earth, and wind. Ochobot's role in giving Boboiboy's powers in the later fight against Adu Du and other villains. Adu Du eventually become their primary adversary up until events in Season 2 where other worse villains showed up and outclassed Adu Du

Adu Du in the Season 1 Finale and back to his place, 6 months later, BoBoiBoy move to Rintis Island, and he continued to school in Rintis Island Primary School. He met his friends again, also his rival, named Fang, who was very jealous with his powers and his popularity at the school.

Meanwhile, Adu Du still with his old plan, to defeated BoBoiBoy. He tried some way to defeat him, but it failed. One day, Adu Du's enemy, named Ejo Jo, plan to come to the Earth, after he was heard about BoBoiBoy and the power ball.

Ejo Jo comes to Earth with his robot, PETAI. BoBoiBoy and his friends tried some way to defeat him, but only Fang, that only defeated PETAI, with his dragon shadow power. After PETAI's death, Ejo Jo fighting with BoBoiBoy with his friend's power watch.

BoBoiBoy returned in Season 3 as he and Gopal convinced Adu Du and Probe to his heroic side. The heroes defeated the Cocoa Monster, The three thieves, Five Scammer Commanders and Mama Zila. However, Adu Du's Mom forced Adu Du back to his villainous nature again, so they became enemies once more. BoBoiBoy defeated his evil counterpart, BoBoiBot, which has the same power of BoBoiBoy himself. He also encountered the Shield Monster, which was defeated at first, but later being rescued by Adu Du and Probe. Ejo Jo wanted revenge on BoBoiBoy, but Captain Kaizo revealed the true origin of Fang, as he is an alien from another planet. They fought against each other, as later Kaizo claimed his plan was just to only prevent the Power Bands from the wrong hands. He narrated at the end of season 3 that he will protect the galaxy from other evil threats.

In the day BoBoiBoy and co. go camping, his friends reminded him that he must not forget about the camp. He and Ochobot were on the way, however, he spotted the police chasing the robbers. He ran to help and left Ochobot behind.

After he defeated the robbers, along with Adu Du and Probe, he when back to Tok Aba's Cocoa shop, until he suddenly forgot about the camp. When he arrived at the bus stop, his friends were angry, mostly Ochobot. He apologized, but they refused to accept it, leaving him in dismay. When Papa Zola came to him, he cheered him up by taking them to squid fishing tomorrow.

During that night, BoBoiBoy suddenly woked up while Ochobot contacted Klamkabot. He thought that Klamkabot was his grandfather, and he said Ochobot should meet him at the floating island. Ochobot later cut their contact, and they when back to sleep again.

The next morning, when they wait for Papa Zola, he and co. were encountered by the Tengkotak. They made a dramatic entrance and Bora Ra demanded him to give him Klamkabot. However, the alien did not see any sign of him, and when he saw Ochobot, he wanted to use Ochobot to find him. BoBoiBoy and co. tried to fight Bora Ra and Gaga Naz, but since they are too powerful, Bora Ra managed to capture Ochobot and left to the floating island.

While Papa Zola taking selfies, BoBoiBoy told him to follow Ochobot to the island. While they are on the boat, they found Probe and Adu Du swimming towards them, along with the enlarged Kurita. BoBoiBoy and co. fought it back, until the Kurita flew to them, then Gopal has to transform its tentacle to weaken it.

The gang kept moving in a jungle, and during the night, BoBoiBoy picked a signal from Ochobot, and the gang followed him into a cave. They found Ochobot being "controlled" by Klamkabot. He harshly attacked Klamkabot, and mistakenly he was a member of the Tengkotak. Later, Klamkabot explained to the kids that Ochobot will be upgraded to teleport to different locations. Until then, Bora Ra and Gaga Naz entered the cave. BoBoiBoy and co. managed to escape from them, except Klamkabot, who was captured by Bora Ra.

In the front door of the Power Sphere Lab, BoBoiBoy and co. thought it was a dead-end until the robots scanned Ochobot to open the door. They were greeted by the lab's computer, and Ochobot was upgraded and obtained the Teleportation Power. Until then, Bora Ra demanded BoBoiBoy and co. to give him Ochobot or Papa Zola, Adu Du and Probe will die. He then set up the plan and confronted them as Ochobot flew to him, while Fang used the shadow rope to connect the gang, Ochobot, Papa Zola, Adu Du and Probe. When Bora Ra realized it was a trap, he and the rest of the Tengkotak attacked them, but BoBoiBoy and co. used their power to prevent their attacks. But before Ochobot could use the teleportation power, Kiki Ta shot him, and Bora Ra succeeded to gain teleportation power. BoBoiBoy attacked Bora Ra, however, Bora Ra managed to defeat BoBoiBoy, but it is unknown by Ochobot, he gave him and the rest his last of powers. BoBoiBoy used his elemental split to use five of his powers. Even if Bora Ra is outmatched by BoBoiBoy, he used his last card by creating the gargantuan black hole to finish them. BoBoiBoy told Fang me must reach him before he escapes, but even if Fang used his newfound power, Bora Ra successfully escaped him. Until the ship teleported back to the same location, he used his last powers to finish him, leaving Bora Ra sucked by his Black Hole.

BoBoiBoy mourned due to his friend's death, however, Ochobot has been revived by Klamkabot, who used his last energy. The gang were happy again and told the heroes that no matter what threat he encountered, all of them has to stick together and fight. Papa Zola took a group selfie with the gang, along with Adu Du and Probe. Until the last moments, BoBoiBoy greeted by Cici Ko, who was later revealed to be Koko Ci. However, he did not hear anything he said, but they waved goodbye to him, and the gang headed back to Rintis Island during the credits.

BoBoiBoy returned in BoBoiBoy Galaxy as a member of TAPOPS, with his new powers, he has to search and find the missing Power Spheres in the Galaxy. He also encountered more villainous threats from outer space.

Throughout the first season, they encounter various evil threats, including Power Sphere users, like the vengeful Captain Separo, a trio of clowns known as the Bad Dudes, the robotic Power Sphere hunter A.B.A.M., the evil imitator Gijimo, and ultimately, the fearsome Captain Vargoba. BoBoiBoy and his friends suffered massive losses thanks to Vargoba destroying most of their fleet and headquaters, but BoBoiBoy manages to defeat Vargoba and send him to outer space, killing the pirate overlord once and for all.

Some time after the defeat of Captain Vargoba, BoBoiBoy and Gopal retrieve EggaBot from Planet Saharu, nearly failing the mission to Gopal's gluttony. They land on Earth at Tok Aba's Kokotiam. He invites a worried Fang to his house for dinner. The next day, they retrieve an emergency transmission from Koko Ci, calling them to the TAPOPS Station. Ochobot insists on going to Planet Quabaq as the next leg of their journey, but BoBoiBoy tells them to go to TAPOPS Station. Retak'ka has ransacked the entire station looking for BoBoiBoy, who came to confront him with Penta Split. Retak'ka tells him that splitting only makes him weaker, before draining his Thunderstorm, Cyclone, Solar and Thorn ELemental Forms. Gopal rescues BoBoiBoy before Retak'ka tells GogoBugi to blow up the station, as Koko Ci tells them to find Hang Kasa.

BoBoiBoy travels to Planet Quabaq to look for Hang Kasa, who saved him and his side from being ambushed by Kang Kongs. Hang Kasa trains him, Gopal, Adu Du and Probe to face his former disciple Retak'ka. Eventually, they managed to finish their training, with Kasa demanding them to pay fees. Hang Kasa traps Gopal and BoBoiBoy in crystal as debt, after taking BoBoiBoy's Quake Element back. With Ochobot's databank fixed, he reveals that Koko Ci told them to go Planet Quabaq to find a way to beat Retak'ka. Hang Kasa recounts the story of how he found Retak'ka and sealed him within the Crystal Prison. Retak'ka tells them to meet him at Earth where he can have access to all seven Elements. Pipi frees BoBoiBoy and Gopal before fully charging EggaBot. Retak'ka outpowers his former master before almost killing him. BoBoiBoy takes the blow, pinning him to a rock. With BoBoiBoy in danger, Gopal joins the fight. Kasa decides to return the Quake Element, encouraging him to stand up against Retak'ka and apologizes for lying to him.

Reminded that splitting makes him weaker, BoBoiBoy fuses into FrostFire. Gopal provides Ochobot to absorb Retak'ka's Elements. Retak'ka fights the remainder, only to beaten down. Refusing to accept defeat, Retak'ka destroys a nearby dam. BoBoiBoy freezes him with Glacier, taking the last Element and blasts him to space as Supra. He collapses into the river but was rescued by the team. BoBoiBoy was treated to his injuries while Mama Zila scolds Papa Zola for taking Pipi aboard. The Power Spheres were given to Amato, with Maskmana asking if he should be helping BoBoiBoy. He replies that BoBoiBoy needs to be independent with a more important mission in waiting. 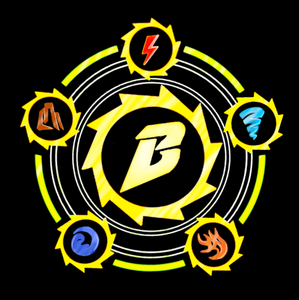 BoboiBoy's B logo and his elemental powers 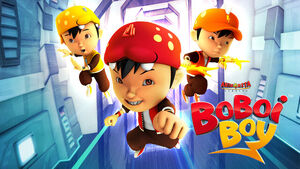 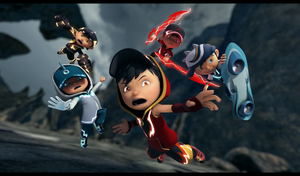 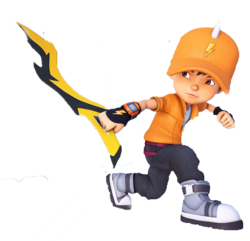