Booble and Clank are characters from the Disney Fairies franchise. They are a pair of bumbling tinker sparrow men and Tinker Bell's first friends.

In the original film, when a new member joins the tinker fairies, Clank and Bobble are the first to meet and befriend this newcomer, Tinker Bell. They also act as the "Welcome Committee" for the tinker fairies and shows Tinker Bell the ropes on being a tinker. Despite their friendly ways toward Tink, she dislikes her talent as one of the other fairies (Vidia, a fast-flying fairy) believe the tinkers are the most useless of the fairies. When Tinker Bell expresses her embarrassment on being a tinker to Clank and Bobble, the duo was obviously offended. However, after accidentally destroying half of Pixie Hollow, Tinker Bell gains help from Clank and Bobble as they work together to restore their home in time for the fairies to travel to the Main Land to change the season.

In the second movie, Tinker Bell and the Lost Treasure, Clank created an invention he called a firework launcher. The launcher shoots light crystals and flowers into the air when the spring is tightened and trigger is thrown. Clank and Bobble were also impressed by the play about the Mirror of Incanta performed at Fairy Tale Theater.

In the third movie Tinker Bell and the Great Fairy Rescue, Clank and Bobble made their first appearance in the movie by crash-landing a dove full of supplies into fairy camp. Later in the movie, they helped build a ship which they sailed with Tink's other friends to rescue her.

In the television special, Clank and Bobble served as sportscaster for the games, as the teams competed.

In Secret of the Wings, Clank and Bobble are seen weaving baskets that are to be sent over to the Winter Woods. During so, Tinker Bell expresses curiosity about the Winter Woods, but Clank and Bobble explain that warm fairies aren't allowed to ever cross the border because they'll surely freeze to death if they do (though Clank follows the law because he's afraid of glaciers). Later on, Tinker Bell briefly crossed while helping Fawn cross over animals for the season. When she did, her wings began to glow. The next day, Tink decides to stowaway on one of the baskets. Clank and Bobble notice this and learn about Tink's intentions.

They decide not to alert Fairy Mary, but are nonetheless incredibly worried for Tink's safety. That night, Clank and Bobble are visited by Tink who tells them about her sister that she met over in the Winter Woods. Clank and Bobble are taken away by the story and offers to help Tink create a machine that will allow Peri to cross over. Clank is sent out to find some supplies, and the bumbling tinker informs Rosetta, Vidia, Iridessa, Fawn, and Silvermist about Periwinkle as well. They all decide to help build the machine, which is completed by morning.

The next day, Clank, Bobble, and Tinker Bell meet Periwinkle at the border and escorts her over to the warm seasons. Powered by Bobble's peddling, the machine proves to be a success as Peri is taken on a tour through the seasons. Near the end of the tour, the heat overwhelms Peri, so the friends rush her back to the border where Lord Milori, the ruler of the Winter Woods, declares it to be too dangerous for Tink and Peri to continue seeing one another. Afterwards, Clank and Bobble notice the snow making machine freezing parts of Pixie Hollow, and struggle to destroy it.

Tink and the others arrive to lend a helping hand, and the machine is destroyed. However, the damage its already done has thrown off the balance of the season. Pixie Hollow begins to become ice cold, and the Pixie Dust Tree is in danger. Clank, Bobble, and the rest of the gang evacuate the kingdom. When everyone's safe, the frost fairies preserve the tree with their magic, saving it from death. When all is good, Queen Clarion and Lord Milori abolish the border law, and Tink and Peri are reunited. Clank and Bobble are last seen enjoying themselves in the Winter Woods. Bobble befriends the frost fairy Gliss, and Clank overcomes his fear of glaciers through the help of the glacier talent sparrow man Slush.

Bobble was one of the fairies had fell asleep to the pollen while Clank had managed to "escape" and had spotted Zarina leaving and told Tink and her friends where she went. While Tinker Bell and her friends went to get the stolen Blue Pixie Dust back, Clank stayed behind to keep the snow making machine running, so the heat won't damaged the sleep winter fairies' wings.

Clank and Bobble are a dynamic duo of sparrow man, who show great pride in being tinkers, unlike Tinker Bell at first. With a brotherly relationship, they are both fairly intelligent but are also on the bumbling side. Some of their favorite activities include tinkering, of course, and magic tricks. They also enjoy a good show at Fairy Tale Theater. They are also the only fairies to reside together in the same home tree.

Out of the two, Clank is far more dimwitted but is very sweet and sympathetic. Like Bobble, he enjoys being a tinker and is on the more goofy side. He also has a fear of glaciers. Bobble appears to be slightly more intelligent than his friend, and a bit more crafty. Unlike Clank, however, Bobble tends to be accident prone, often a victim of some kind to his own inventions. 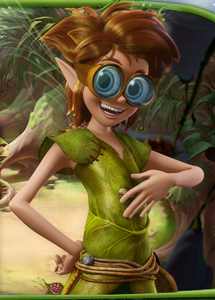 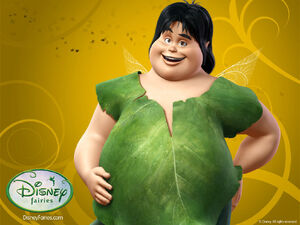 Clank
Add a photo to this gallery

Retrieved from "https://hero.fandom.com/wiki/Bobble_and_Clank?oldid=2065317"
Community content is available under CC-BY-SA unless otherwise noted.