Student
Judge (only in the dream)

Spending time with his father and his friends

His father and his friends

He gets a lesson in school about how to properly massage his gums to take care of his teeth. After class is finished, his father won't let him to an ice cream shop to have a sundae or go fishing.

When decides to go back home, he hears a bark and realizes that a beagle dog is lost. He decides to keep him, his father won't let him. He cleans the dog to not make his father angry. However, his father is angry, kicks out his lost dog and then punishes him and Bobby cries in bed. His father goes back downstairs but then trips over a roller skate and accidentally breaks the vase. Father walks back upstairs, realizing Bobby has gone. He then tries to find him, thinking that he is hiding.

Elves and other creatures come to life from the wallpaper and knock the father unconscious. Then he wakes up seeing that he is in the court. The dwarfs tell him that he is a "mental giant" and find him guilty. However, according to this, Bobby has not gone but disguised himself as a judge and sentences his father into the youth machine which turns him into an infant, making his life start all over again and be locked up and treated as a baby in the machine forever.

How the father wakes up from dream, the machine feeds him with a bottle. He is seen for the last time spending time happily with father and friends, every go out for sundaes and go fishing in the river as cartoon ends. 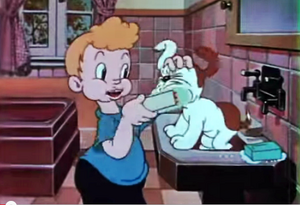 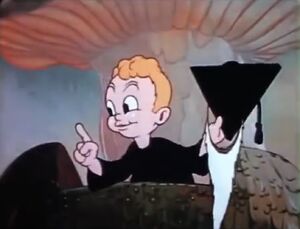 Bobby reveals himself to his father 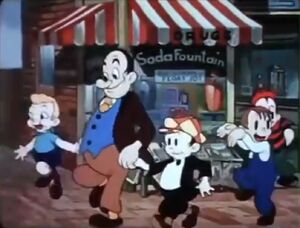 Add a photo to this gallery
Retrieved from "https://hero.fandom.com/wiki/Bobby_(Boy_Meets_Dog)?oldid=1704475"
Community content is available under CC-BY-SA unless otherwise noted.