Bob-omb, better known as Bobby is one of Mario's second partners in Paper Mario: The Origami King. he is portrayed as a laid-back amnesiac Bob-omb who journeys with Mario and Olivia during the Blue Streamer expedition in order to recall the remnants of his past and make new memories with them. Unlike other Bob-ombs, Bobby has no fuse, as it broke off during a Gooper Blooper attack.

Bobby's known background consisted of taking a cruise with his Bob-omb friends, when it was suddenly attacked by a giant Gooper Blooper and Bobby lost his fuse in the process and falls into the Great Sea. He is washed up on the docks and is left unable to recall his past so he travels in hopes of uncovering it.

Bobby is first seen taking a tram ride to the Autumn Mountain, and happened to share the ride with Mario and Olivia, who travel their to obliterate the Blue Streamer. Along the way, Bobby has a tendency to wander off, getting himself lost, and unintentionally cause Mario and Olivia much trouble by continuously running into danger, which he must be saved and played a necessary role in opening the Water Vellumental Shrine. Bobby doesn't join them on their expedition.

When they reach Shogun Studios, he continues to follow his companions to search for several items, in order to liberate the town which is overrun by Folded Soldiers. They entered the Big Sho' Theater where Mario does stage performances and eventually battles Rubber Band and defeats it, and proceeds to destroy the Blue Streamer. With Shogun Studios free of Folded Soldiers, they have a fireworks show, which helps improve Bobby's memory immensely, much to Mario and Olivia's joy.

They travel to Sweetpaper Valley, where they are confronted by Olivia's older brother King Olly, who traps her under a giant boulder. With his regained memories, Bobby realizes that there is a way to save her, but he doesn't tell Mario and while not comfortable with leaving Olivia behind, there wasn't any other choice but to do so anyway. He insisted that he trust him as they find his "important item" overseas. They travel to the cruise ship The Princess Peach, where it looked abandoned but still had crew members. There they had to save the Toads and help restore power so they can take the elevator to the VIP room where there was a yellow box there, which gets stolen by Gooper Blooper before they could obtain it. After defeating the giant creature and retrieving the box, they return to Sweetpaper Valley where Olivia is still stuck.

Bobby then tells him his backstory of the events that led to his first meeting with the duo, and the box contained the fuse of his late-best friend, who died several years ago and kept it as a memento. He attaches it on his head and says his last good-byes. Mario realizes what he is about to do and tries to stop him, but Bobby explodes, which tossed Mario back, destroys the boulder, and tragically dies. Olivia was grateful to be free and notices that Bobby isn't there, then she saw Mario turning his back on her in sadness and saw the burned spot where Bobby last stood. She quickly realized what Bobby did and rushes into the mines, crying over his death. With Olivia too broken up to continue, Bobby's spirit appears to Mario and acknowledges her situation, but is worried that his sacrifice would have been done in vain if she doesn't continue with Mario in their quest to stop King Olly and suggests using a funny face to cheer her up, which Mario then used a Goomba Mask, which did the trick. He is not encountered again afterwards. If Mario examines the rubble in the mines where Bobby's spirit was, Olivia asks what he's doing and insists that they keep going.

At Bowser's Castle, Olivia mistakes a Bob-omb and several others boarding the giant Airship for Bobby, which the Bob-omb corrects her by telling her otherwise, but she continues addressing them as Bobby anyway. 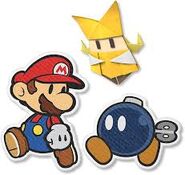 Paper Mario - Save Olivia! Goodbye Bomb-omb Bobby - The Origami King
Bobby sacrifices his life to free Olivia from the boulder.