Robert James "Bobby" Ewing is one of the main characters in Dallas, and also appeared in the 2012 revival series.

He is the son of Jock Ewing and Miss Ellie Ewing, and is J.R. Ewing's younger brother. Bobby later became the roadman for Ewing Oil.

He was played by Patrick Duffy in all his appearances.

Bobby is a principled and honest man with great moral and ethic values. He doesn’t care about any family feuds, and is extremely upset about anything illegal connected to his family’s name. As such, he refuses to help his brother J.R. to set up one dubious thing or another.

Bobby really loved his first wife Pam, so much that he didn't consider any other relationships after Pam's departure.

Born in 1949, Bobby is the youngest son of Jock and Miss Ellie Ewing. He later became a successful oil baron, like his father and brother J.R., but he lacked J.R.’s ruthlessness and insisted on playing fair which resulted in his limited success.

Despite this, Bobby managed to beat J.R. several times in business acumen and control when the family name and stakes were high enough. When they weren’t at odds with each other, the brothers had many run-ins with his brother in law Cliff Barnes.

The oil industry was not Bobby’s only interest. He also took part in the raising of cattle on the family ranch, Southfork.

Quite early on, Bobby adopted a boy named Christopher, who was the son of J.R’s deceased sister-in-law, Kristin Shepard. He also has a son named Lucas Krebbs from his relationship with Jenna Wade.

After many years of company struggles, ranching and many other things and tragedies, Bobby eventually left the oil business completely and continued living at Southfork Ranch with his son Christopher. After J.R. lost Ewing Oil to Cliff Barnes, he began to stay with Bobby and began to suffer with psychosis, which resulted in J.R. shooting the mirror after "seeing" the devil in his reflection, which shocked Bobby. In the late 2000s, J.R. began to suffer from severe depression and fell into a supposed catatonic state, so was sent to a nursing home for treatment, where Bobby would visit him regularly to try and get through to him.

In the revival series, Bobby is diagnosed with cancer, and begins to contemplate selling Southfork and retire, hoping to dedicate it to the memory of his late mother. He visits J.R. in the nursing home, and laments that he hopes their sons don't feud like they did in the past. J.R. is visited by his son John Ross who reveals to J.R. about Bobby's intents to sell Southfork, which causes J.R. to wake from his depressive state.

J.R. later begins living with Bobby. He isn't happy when he sees Bobby talking to their enemy and Bobby's former brother-in-law Cliff Barnes, who is now a rich businessman wanting his hands on the land. But Bobby turns down Cliff's offer as he doesn't want the land to be used for drilling.

In the second season Bobby turns to J.R. for help taking down his wife Ann's ex-husband Harris Ryland, who it transpired kidnapped Ann's daughter many years ago and made her believe she was dead. J.R. assured Bobby that he would come up with something, and that it would be his "masterpiece".

J.R. is shot dead during a mysterious visit to Mexico. Following the funeral, J.R.'s second in command Bum gives Bobby a letter written by J.R., the contents of his stuns Bobby. Bobby tells the rest of his family that it won't be disclosed until the time is right.

In the aftermath of J.R.'s death, Cliff and Harris team up to bring down the Ewings and get their hands on their company Ewing Energies. They successfully do this by bankrupting the Ewings, but Bobby and the Ewing family use J.R.'s instructions to get shares in Barnes Global, becoming a majority shareholders in the business. Around this time it is discovered that Bobby's ex-wife Pamela has been dead since 1989, and that Cliff covered up her death to prevent Christopher from inheriting her share of Barnes Global, not wanting the Ewings to get involved. Bobby also takes part in setting Cliff up for J.R.'s murder, as retribution for Cliff having the Ewing oil rig blown up which resulted in the Cliff's daughter being injured and losing her unborn children (which were also Christopher's). Bobby visits Cliff in prison and tries to make a deal with him that he will clear him of J.R.'s death as long as he confesses to being behind the rig explosion, but Cliff refuses, leaving Bobby no choice but to allow Cliff to rot forever inside.

Bobby dies after being ran over by a car.

Bobby in the shower after his return.

Bobby as he appears at the end of the Family Guy episode, "Da Boom" along with Pam in a live-action recreation/spoof of the shower scene. 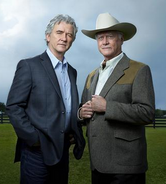 Retrieved from "https://hero.fandom.com/wiki/Bobby_Ewing?oldid=1872634"
Community content is available under CC-BY-SA unless otherwise noted.