In love
Roberto "Bobby" Alejandro Martinez-Millan Luis Santiago, Jr. is one of the two tertartagonists in The Loud House and the tritagonist in The Casagrandes. He made his debut in "Get the Message" by name and "Undie Pressure" physically.

Bobby is Lori's boyfriend and also Ronnie Anne's big brother. He has many jobs, such as pizza delivery boy, a pool lifeguard, a mall security guard and a grocery stock boy.

Generally Bobby has a relaxed and carefree attitude and is similar to his girlfriend's roommate Leni Loud. He is an easygoing boy who likes to have fun and hanging out with other friends. He can be altered if Lori doesn't message or call him or if something bad occurred to his sister.

He's a little silly, as shown in "Undie Pressure" where he tells Lori that he would be in her house sooner but he had to wait for a chicken to cross the road. He also jeopardized Luna's attempt to free Lincoln and Clyde out of his sillyness, as seen in the episode "For Bros About to Rock". His absent-minded nature can come with some negatives, such as when he and Lincoln started hanging out more in "A Fair to Remember" where he ends up getting distracted so much by Lincoln that he forgets to pay attention to Lori, making her cry.

He has many jobs, this may be because he wants to obtain more money or just to impress Lori, like in "For Bros About to Rock" where he says to Lincoln that he took the mall security guard job because Lori loves men with uniforms.

Bobby is Lori's super cool boyfriend and a man of many jobs. When he's not a pizza delivery boy, pool lifeguard, mall security guard, or grocery stock boy, he can be found texting Lori. Bobby may be dense, but he sure is smooth!

Bobby is as tall as Lori. He has tan skin and black hair with a tuft combed upwards. He wears blue jeans, brown shoes, a belt, and a cream-colored T-shirt under a green unbuttoned shirt.

His original design was completely different from its current design. In this one, he has a more urban outfit, including a bonnet covering his eyes and headset. He also was going to have freckles on his cheeks and a more scruffy hair.

He is a loving and protective big brother towards her, in a similar way to how Lori treats Lincoln. If something bad occurs to Ronnie Anne, he will do anything he can to defend her, even if that means breaking up with Lori as shown in "Save the Date".

Ronnie Anne is annoyed by Bobby's cutesy attitude with Lori, mainly when they kiss.

He and Bobby seem to have a friendly relationship. Bobby understands Lincoln's dilemma of living with just sisters and no brothers, as he also has a little sister. In "Save the Date", Bobby was mad at Lincoln for making his sister cry, but after they reconciled he was back on good terms with him. As seen in "A Fair to Remember" they seem to regard each other as "bros", both seeing the other as the brother they never had.

Lori is Bobby's girlfriend and although it's not often shown they love each other very much. Lori is constantly messaging or calling him with her cell phone and vice versa. If one of the two doesn't call or message for a long time, they will go into despair. This is evidenced in "Undie Pressure", where she can't endure to talk to Bobby and let him enter to her house, losing the bet in the process. In "Project Loud House", they get into a fight over a tux that Lori picked out for him and he refused to wear. This upset Lori so much that she didn't want to go to school at all. Lincoln tried, and actually managed, to trick her into coming out by posing as Bobby over the phone and apologizing for the fight and accepting to wear the tux. Since this wasn't the real Bobby, it is unknown if Lori found out Lincoln tricked her. It is likely they got it cleared up eventually.

In "Save the Date", when Bobby found out Lincoln (unintentionally) hurt Ronnie Anne's feelings, Bobby got furious at this and decided to break up with Lori for this, leaving her devastated and heartbroken over losing her man and furious and vengeful at Lincoln for what he said to his sister. She forced him on a double date to make up for it, and eventually, she and Bobby got back together.

In "Cheater by the Dozen", Bobby plans a date for Lori by making a reservation in Giovanni Changs Italian Chinese Bistro, asking help from his old co-workers for purchasing her a dress, find good romantic locations, getting a new tuxedo, learn how to dance and order food in Italian Mandarin. At the end they dance in the restaurant.

The relationship with Luna seems to be rather unclear with the two, but Bobby does seem to enjoy Luna's company and music. However, Luna may not be on as good of terms with him. In "Undie Pressure", when he was begging to be let into the house to see Lori, Luna basically tried to shoo him away while preparing to use her annoying habit as quietly as possible. In "For Bros About to Rock", he easily recognized her in her mom disguise and got her locked up with Lincoln and Clyde. So, their relationship may not be very mutual.

Due to his obsession with Lori, Clyde seems to despise Bobby simply for being Lori's boyfriend. In "Two Boys and a Baby", Clyde's story about him and Lori as a knight and a princess ends with Bobby getting eaten by a monster. In "Save the Date", Clyde tries to humiliate Bobby while he was on his date with Lori.

However, in "A Fair to Remember" Clyde looks to enjoy being with him and Bobby also treats him as a "bro", despite his obsession with Lori. Both appear to be in good terms.and as of loudest mission he no longer lives in royal woods michigan he now lives with his mothers family the casagrandes. 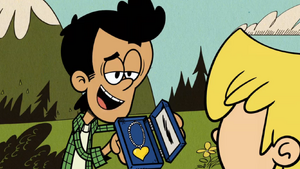 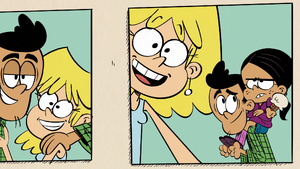 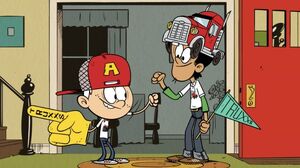 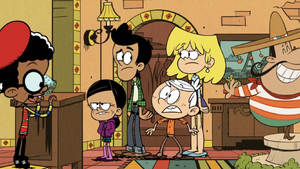 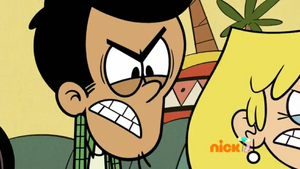 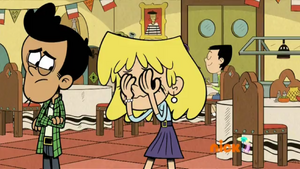 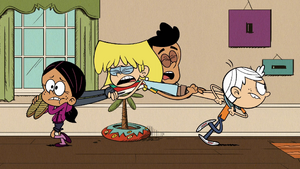 Retrieved from "https://hero.fandom.com/wiki/Bobby_Santiago?oldid=1752765"
Community content is available under CC-BY-SA unless otherwise noted.