Start a Wiki
Bobobo-bo Bo-bobo (ボボボーボ・ボーボボ) is the main character of a fictional manga and anime series by of the same name. In the final popularity poll of the series, Bo-bobo came in third overall, beneath Don Patch and Heppokomaru/Gasser. He is also pretty much always very childish and annoying.

Bobobo-bo Bo-bobo is the cool and incomprehensible hero, swarthy and musclebound, sporting sunglasses and a large golden afro. His hair is 24-karat gold but is usually said to be yellow or blonde; some viewers even argue about its true color. He is called "Bo-bobo" for short, as he refuses to let people call him "Bo". He apparently has some control over an army of stuffed teddy bears which are seen in many of the earlier episodes. There is a large colony of tiny humans and humanoid boogers living in his nose, who sometimes aid him in battle. He also has two squirrels living in his afro named Sally and Bill.

Defining Bo-bobo's personality can be difficult. He is an unpredictable person, not even his allies are aware of what he will do next. However, when he is not involved with one of his antics, he manages to retain a semi-serious composure, though he is very sensitive; even the slightest put-down can make him depressive. Bo-bobo's personality becomes increasingly more serious when he is faced with strong opponents. Despite being the good guy of the series, he often beats up or tortures some of his allies (namely Don Patch, Tokoro Tennosuke, and Dengakuman) for being stupid or annoying. He is also a very powerful Haijekelist and makes a powerful team alongside Don patch and Tokoro Tennosuke. Because of this, he can act very goofy and unpredictable.

His personality shows different aspects depending on who he is talking with. His interactions with Don Patch, Tokoro, and Dengakuman are usually goofy with him often using them as shields or weapons. He usually shows his serious nature with Softon and Hatenko. He cares very deeply for his friends despite his violent tendecies toward some of them for acting stupid.

Bo-bobo fights with his nose hair using the "Hanage Shinken" (鼻毛真拳; "Fist of the Nose Hair", sometimes called "Super Fist of the Nose Hair", other times "Snot Fo-You"). This technique involves stretching out his nose hairs in order to whip or constrict his enemies. He is one of the few people who knows this technique, so he believes that it is sacred and that he shouldn't overuse it. Bo-bobo's odd personality comes from the fact that he is also a hajikelist. As such he is very random, making obscene, unpredictable actions used to confuse his enemies into submission. He is also known to have more techniques than any other character in the series. 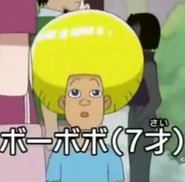 Bobobo as an art sculpture 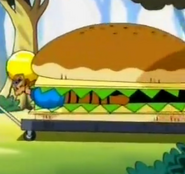 Bobobo as Beauty
Add a photo to this gallery
Retrieved from "https://hero.fandom.com/wiki/Bobobo-bo_Bo-bobo?oldid=1780758"
Community content is available under CC-BY-SA unless otherwise noted.