Garfield: A Tail of Two Kitties

Bull in the barnyard castle

Bolero is the black bull that he is the major supporting character from Garfield: A Tale of Two Kitties.

He was voiced by Jim Piddock.

Garfield: A Tale of Two Kitties

He was in the castle along with the animals and the late Lady Eleanor for the meeting in the outside in the window.

He present to Prince the 12th that he was the king that he become and Lord Dargis that tried to get rid of him.

He sees that other cat was Garfield and look alike to Prince, then in outside, Lord Dargis with Rommel to search Garfield in the castle, in Kitchen he and the animals are cooking Lasagna that Garfield like to eat.

In the outside he is having a party in the pool, later he was at the outside and he sees Prince and Garfield are look alike and the plan to get rid Dargis, in fact, he got Garfield's back and Rommel runs away that he chases him.

In the end, he is enjoys the party in the pool with animals and Prince and Garfield. 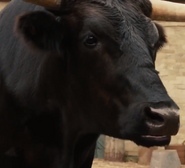