Hanging with his friends

Bolin is one of the tritagonists (alongside Mako) of The Legend of Korra, serving as one of the two deuteragonists (alongside Mako) in the first two seasons, and a major character in the second two seasons. Bolin is an earthbender in Rebublic City with his brother, Mako, and one of the first people Korra meets when arriving to train with her mentor Tenzin. His naturally chipper demeanor gave Korra a fast friend in after her move to the city. Through Bolin, Korra and Mako also become fast friends and the three start off as team-mates in Probending, which establishes them as team-mates for stopping various threats Korra must deal with as The Avatar.

Bolin and his brother Mako were Pro-Benders. Benders are those who are born with the power to manipulate the elements, descendants of various people touched by spirits a long time ago, whose powers awaken based on natural talent and refined through various disciplines. Pro-Benders are sports stars who use bending as a form of competition. Bending is passed down along family lines, and as such, for generations benders can be separated by the nations they are from.

Republic City was founded by the previous Avatar, Avatar Aang. Aang stopped the mad-king of the Fire Nation gone warlord, Fire-Lord Ozai, from destroying the Earth Nation, halting him as he first started across the tip of it burning an island to the ground with his power. Ozai was defeated on the island and since it needed to be rebuilt anyway and Aang had saved the world, the Earth Nation granted the island independence and Aang founded a new common-wealth there which would become Republic City. Republic City is a melting pot for the Four Nations and members from across the world came there to co-mingle or find new opportunities. Unfortunately, some of the opportunities sought were criminal ones, and though Republic City is diverse, it also has serious crime issues, especially since many criminals are benders, using their powers and the powers of fellow gang members to commit crimes that are hard to stop since all the elements can be potentially involved in a single heist.

It was in this environment Bolin and Mako were born. Bolin and Mako's father, San, was from the Earth Nation and their mother, Naoki, was from the Fire Nation. As it turned out, both of brothers were Benders, with Bolin as an Earthbender and Mako as a Firebender. Originally Bolin and Mako used their abilities for the gangs but soon gave up crime, both because they disliked stealing to get by and because they felt Republic City gangsters were largely not worth dealing with for money. When Pro-Bending matches opened up, Bolin and Mako realized they could use their powers to make an honestly living by competing as a team for entertainment. Though there are four elements, the Air Nation was massacred, safe for Avatar Aang and his children, who were the only remaining air-bender. Because of this, though all benders are allowed in spirit, largely only the other three, fire, water and earth, are competitors. Each team in Pro-Bending is made up of three members one for Earthbending, one for Firebending and one for Waterbending. Bolin and Mako's team is named the Fire Ferrets after Bolin's pet fire ferret Pabu, which they use as a team mascot. Though they originally had a third member as a waterbender, he quit after several loses leaving Mako and Bolin unable to compete.

Korra had been admiring the new sport shortly after arriving in the city and caught the walk-out of the third Fire Ferret while dropping by to meet the team. Bolin was almost instantly smitten with Korra and tried to make her feel appreciated as a fan. Upon hearing they would no longer be able to compete, Korra offered her services as a bender. Though Mako was originally hesitant to just allow a walk in on the team, Bolin pressured his brother to accept her, and with no other options, Mako agreed. Korra became the third member of the Fire Ferrets. Bolin, Mako and all of Republic City quickly discovered the new member of the Fire Ferrets was The Avatar, the new reincarnation of Aang, shortly after she started competing when she was able to manipulate all four elements. Though the judges had to allow all forms of bending and were not prepared for airbending, let alone someone who could manipulate all four elements at once, they ruled that Korra must isolate her bending to only one element per match to keep the game fair. With Korra as a star player, because of the new precedent she set, The Fire Ferrets fandom increased and turned the team into semi-stars. Bolin continued to try to endear himself to Korra, at first as a friend, then later as a boyfriend. Bolin was nearly crushed when he found out Korra was attracted to Mako, and though the romance was dashed early, the three managed to remain friends, and through Pro-bending became somewhat inseparable. As more and more dangers arose in Republic City that the Avatar was obligated to deal with, Bolin and Mako began to help Korra out more and more regardless of Pro-bending matches.

Bolin is mainly both laid-back and excitable. He likes to have fun and is eager to engage with others. Bolin usually tries to find methods of resolving conflict outside of fighting, however he will still engage in combat once it has started. Bolin is frequently seen as immature by Mako, but also does his best to cheer up his normally dour brother. Korra takes to fun and game much easier than Mako, but is still weighed down with responsibility, which Bolin does his best to relieve with acts of levity.

Bolin is very protective of the people he cares about. He will act immediately if one of his friends is threatened. When Mako's girlfriend and the fourth friend in their circle, Asami Sato, is threatened, Bolin instantly leaps into action to protect her from harm. Though Bolin gets highly emotional, he is also very forgiving of others, sometime to a fault. This lack of emotional control and naivety towards others ended up with him being declared the boyfriend, and briefly, fiancé of the Water Tribe princess Eska, despite being mistreated by the sadistic, though ultimately good-hearted, princess. 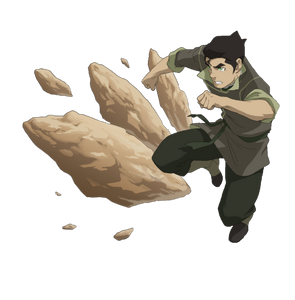 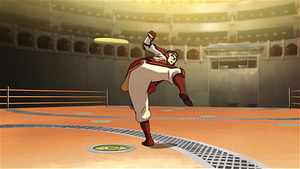 Bolin playing in a pro-bending match. 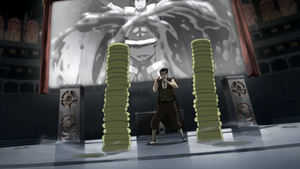 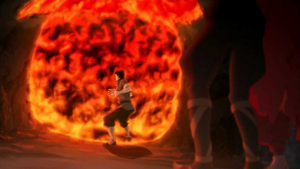 Trapped and desperate, Bolin discovered his ability to lavabend and stopped the incoming lava.