NOTE: This article is about the incarnation of Bomb from The Angry Birds Movie Duology. The mainstream version can be found here: Bomb (Angry Birds).

Defeat the pigs and get the eggs back (The Angry Birds Movie: Succeded)

Save Bird Island and Piggy Island from Zeta (The Angry Birds Movie 2: Succeeded)

He is voiced by Danny McBride, who also voiced Boss Wolf in Kung Fu Panda 2, Honey Mustard in Sausage Party, Tennessee Faris in Alien: Covenant and Rick Mitchell in Connected. In the Japanese dub from the movies, he is voiced by Kenji Nomura.

Bomb is shown to be calm, kind and loves to have fun. He is not the sharpest tool in the shed, however, as he tends to make mistakes. He is not good at lying either, as when Red turned down Chuck's offer to hang out and the latter says he's busy anyway, Bomb tries to come up with an excuse, only to fail horribly.

Something that occurred occasionally in the first film was Bomb exploding due to either being surprised or angry. The former happened more than the latter at first, as he could never do it intentionally. By the film's climax, he is able to blow up on purpose.

Despite not being the smartest guy, Bomb does have a way with words. This is most notably demonstrated with his poetry skills, which made everyone in the anger management class (sans for Red) emotional.

Bomb's ability is a combination between his ability to explode and his shockwave ability as seen when he blew up most parts of the Pig City in Piggy Island with this ability similar to an Atomic Bomb. But a normal explosion occurs when he gets stressed in some way, as he admits when he says "Sometimes when I get upset, I, uh, have been known to, uh, blow up" This same effect was shown when he was given a surprise Hatchday (The bird equivalent of birthday) party, and subsequently blowing up his house. This was shown again when he tries to do a Yoga pose in Matilda's class and cannot hold it longer, resulting in him exploding in Matilda's house. For him to blow up in purpose he have to think of situations that can stress him. 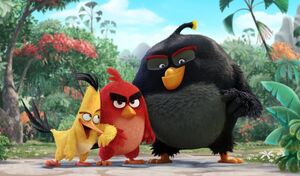 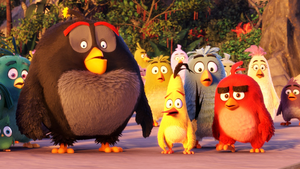 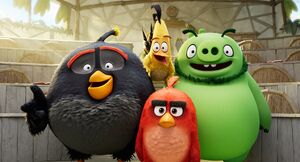