To rob banks with her mother (formally)

Lana Baumgartner, also known as Bombshell, is a character in Ultimate Marvel Comics. She is a former supervillain-turned superhero who used to rob banks with her mother until she eventually reforms and becomes a full time superheroine.

After Secret Wars (2015), Bombshell/Lana Baumgartner is now currently displaced to Earth-616. She was created by Brian Bendis and David Lafuente.

Lana Baumgartner was born to Lori Baumgartner, who was a supervillain criminal and had powers, which Lana inheirted. Her mother raised her to become a criminal which made Lana foul-mouthed to everyone who tries to stop her and her mother. But due to their powers, they can weaken if they are far away from each other

Lana robbed banks with her mother Lori Baumgartner; it seems that she does all the work with her blast power. When they were arrested last time, Lana was separated from her mother, who was imprisoned. The judges believed that her mother influenced her to rob banks, as she's still under-age. She was put under her grandmother's protection and attends school with Peter Parker for a short while, where she is recognized - but convinces Peter and his friends to keep quite about her super villainous exploits.

Years later, after Peter Parker's death, Lana becomes part of the All-New Ultimates, alongside The New Spider-Man (Miles Morales), Kitty Pryde, Spider-Woman, Cloak and Dagger. With her newfound friendships with her allies, Lana fully reforms and becomes a full-time superheroine.

After surviving the Secret Wars event, Lana is currently displaced to Earth-616 along with her mother and allies. She continues fighting crimes with Spider-Man (Miles Morales) and has become a member of the team, the Champions. 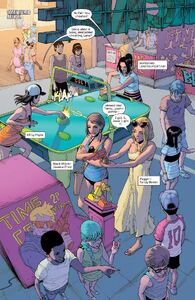 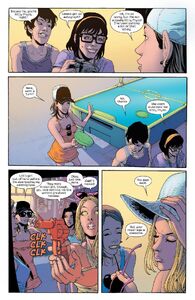 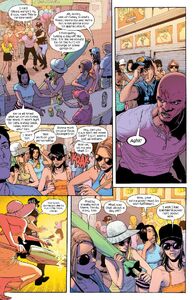 Add a photo to this gallery
Retrieved from "https://hero.fandom.com/wiki/Bombshell_(Lana_Baumgartner)?oldid=1770359"
Community content is available under CC-BY-SA unless otherwise noted.