Bongo is a one eared rabbit created by Matt Groening who appeared in Life in Hell comics. He makes cameos in The Simpsons and Futurama Shows.

Maggie owns a stuffed Bongo doll, and has been seen playing with it on numerous occasions.

On Futurama, he appeared in Joe's Ark Pet Store as an animal being sold by the pet store clerk. In Bender's Big Score, Santa Claus' aides made toys resembling him, so is presumably somewhat famous in the Futurama universe. Along with Binky, he also has a cameo in "Simpsorama", Disputed canon where he writes on the wall, "Crossovers are hell", both in reference to the name of his comic strip and lampshading the fact that the episode is a crossover. 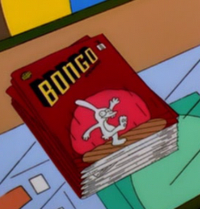 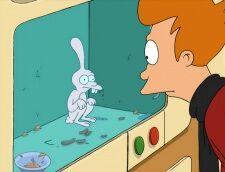 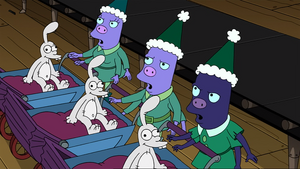 Add a photo to this gallery
Retrieved from "https://hero.fandom.com/wiki/Bongo?oldid=1864984"
Community content is available under CC-BY-SA unless otherwise noted.