Bonkers D. Bobcat (born William Daniel Bobcat, Jr., but always goes by Bonkers) is the main protagonist of the underrated 1993 Disney animated series Bonkers (and inter-dimensional big brother of video game character Bubsy, born Robert Timothy Bobcat). He is a star for cartoon shorts at Wackytoon Studios, an overly energetic and hyperactive, out-of-work, and as Toon Bobcat that works in the Toon Division of the Hollywood PD.

Once a big star for a series of cartoons known as "He's Bonkers!" at Wackytoons Studios, Bonkers was a knobby-eared, Toon bobcat who was in love with his leading lady, Fawn Deer. He was almost never without his trusty companion, Jitters A. Dogg, and usually facing the threats of his arch-rival, Grumbles the Grizzly. Behind the scenes, his other friends included: Fall A-part Rabbit (who served as his stunt-double), the Mad Hatter and March Hare (who served as his makeup artists), and his pet dog/horn, Toots.

Sadly, however, Bonkers was fired due to his show being bumped out of first place in ratings. He was then introduced to law enforcement when he unknowingly saved cartoon celebrity Donald Duck from a dangerous park mugger, mostly due to the help of officer Lucky Piquel, and was given full credit for the mugger's capture.

For his actions, he was given the Citizen of Valor award by the Chief of Police, Leonard Kanifky. Bonkers, while soaking in the praise, told the chief of his experiences starring in a cop cartoon series which helped in the capture of the mugger. Chief Kanifky believed his story, taking it for granted, thinking that Bonkers would be a benefit to the police force, and asked if the Toon would like a job working for the Hollywood PD, which Bonkers accepted. Bonkers then requested Lucky Piquel as his partner. However, meantime, all of Bonkers' old Toon friends mysteriously began disappearing, being kidnaped and brought into the hands of the evil "Collector". To solve the crime and rescue his friends, Bonkers teamed up with Lucky Piquel, and thus established the beginning of the Toon Division.

After the rescue and many other stange cases with Bonkers, Lucky moved to Washington DC. in order to become an FBI agent. Bonkers later worked alongside the police officers Miranda Wright and Sergeant Grating, still remaining under Chief Leonard Kanifky. 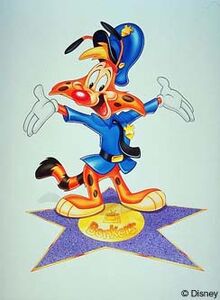