Playing with her toys.

Have fun with her toys.

Bonnie is a 4-year-old girl whose trademark is her pink tutu. She goes to Sunnyside Daycare, where she is the daughter of the receptionist, Blair. Even though Bonnie has an active imagination when playing with her toys (similar to Andy), she is shy and withdrawn when she is around adults.

Bonnie is first seen sitting on the front desk at Sunnyside, holding the Monkey in her hand, wanting to see what Mrs. Davis (her mother's friend and Andy's slightly older mother) is donating. But, when her mom closes the box flap, she slumps and pouts in disappointment. Later, she finds Woody hanging by his pull-string from a tree, and she takes him home to meet her very own toys: Mr. Pricklepants, Trixie, Buttercup, Dolly, Peas-in-a-Pod, Totoro, and Chuckles the Clown. When Woody goes back to rescue his friends, he stows away in Bonnie's backpack.

She isn't seen again until at the end of the movie when Andy stops at her house to donate his old toys - Jessie, Bullseye, Rex, Mr. and Mrs. Potato Head, Slinky Dog, Hamm, The Aliens, and Buzz Lightyear - to Bonnie, Woody having left a note on the box containing the others. Upon seeing Woody- who had sneaked into the box after Andy packed- she turns to grab him, but Andy pulls Woody away, which gives Bonnie a disappointed look on her face. After seeing how Bonnie loves Woody as much as he does, Andy relents and gives Woody to her, and they play with their toys before Andy finally leaves for college. She is last seen when she is taken into her house by her mother for lunch, leaving the toys to watch Andy's car disappear down the road.

In the end credits, it is shown that Bonnie has made drawings for her toys, including the ones handed over from Andy. She also has drawn Chuckles' smile right, the sight of which makes Chuckles smile for the first time ever since.

In the first episode, Bonnie briefly appears in which she says, "I'm going on vacation," as she bursts into her room, quickly grabs her suitcase from the closet, and rushes out of the room, leaving behind her book bag that, unknown to her, contains Ken and Barbie. Ken despaired as Bonnie and her family drove off to Hawaii.

In the second episode, Bonnie and her mother eat at Poultry Palace. Bonnie was disappointed that she got a Zurg Belt Buckle in her Fun Meal and requested it is exchanged for a Mini-Buzz. However, the cashier said that they are out of Mini-Buzzes and the one on display is not for sale. Bonnie then went to play in the ball pit with Buzz and Rex, imagining she was sliding into hot lava. As her mother told her they were leaving, Bonnie was unaware that Mini-Buzz had swapped places with her Buzz.

In the third episode, Bonnie takes Rex to play in the tub with her bath toys, pretending that Rex was a vicious sea monster. But the fun didn't last when her mother turned off the water, drained the tub and wrapped her in a towel to take her to dinner at her grandmother's.

While on the road with her mother, in the middle of the trip, Bonnie, who was in the car, yawns and sleepily asks her mother if they're at their destination, but Bonnie's mom said they won't be at Grandma's for a few more hours, so she says to her daughter to go back to sleep. Suddenly, one of the car's tires blows out, forcing Bonnie and her mother to pull over into the Sleep Well motel. Upon learning that the tow truck won't come until morning, they are forced to stay for the night. While they slept, Bonnie's toys leave her suitcase, only to be captured one-by-one by the manager Ron's pet iguana, Mr. Jones. When her toys were found, she gives Jessie a hug.

Next morning, as they were checking out, Bonnie noticed the curtain behind the manager's desk being pulled back, revealing Bonnie's missing toys. Bonnie quickly collects them and she and her mother leave the motel.

Two days after Christmas, Bonnie plays out a variety of roles with her toys, but sadly for Trixie, does not play with her as an actual dinosaur, instead choosing to play with Angel Kitty as a Kittysaurus. Afterward, she collects Woody, Buzz, Rex, Trixie and Angel Kitty for her play date with her friend Mason. Upon arriving, she finds Mason playing his new Optimum X game console and he invites her to play, prompting Bonnie to toss her backpack with her toys into Mason's room.

Unknown to Bonnie, her toys encounter Mason's new Battlesaurs, who are unaware that they're toys because Mason was fixated on the Optimum X, and thus sought to kill Woody and Buzz. Trixie goes for the Optimum X's power switch to get Mason and Bonnie's attention off of it. With the game turned off, Mason goes for the power switch, only to find Reptillus Maximus instead. Upon spotting the Battlesaur, Bonnie begins playing with him, prompting Mason to join her and they spend the rest of the afternoon playing with their toys. Afterward, Bonnie collects her toys and returns home as her mother plans on bringing her back next Tuesday at around three-thirty/3:00 PM.

Bonnie appears in the next Toy Story movie, but she is voiced by Madeleine McGraw instead of Emily Hahn. She creates Forky, a home-made toy made out of a spork. She also brings the whole gang on a family road trip where they find a carnival. She even cries for the first time, which is also the first time a toy's owner is seen crying. She also neglects Woody, despite her promise to Andy and her love for the former in the previous movie.

Bonnie is a slender young girl with fair skin, hazel eyes, and short dark brown hair. She also wears a bracelet and necklace with multi-colored beads. She is mostly seen wearing green.

When she first appears, she wears a green striped dress with short sleeves and a light blue border, orange shorts, a light blue sock with purple polka dots on her right leg, and a lime green sock on her left leg. When Woody returns to Sunnyside, she can be seen wearing a yellow t-shirt with an orange border and flower on it, light and dark green striped short sleeves, light blue leggings under a dark blue mini-skirt, white socks, and pink shoes. When she receives Andy's Toys, she wears a lime green t-shirt with a light blue border and light and dark blue sleeves, dark teal overalls, a pink tutu, and yellow rain-boots.

In Hawaiian Vacation, she maintains her primary outfit.

In Small Fry, she wears a light green t-shirt with an orange border, a blue denim skirt, and light blue leggings.

In Partysaurus Rex, she keeps her trademark green shirt and teal overalls.

In Toy Story That Time Forgot, she wears a light green sweater with a dark green collar, a pink undershirt, a purple skirt, green and blue checkered leggings, and green shoes. When arriving at Mason's house, she wears a purple winter jacket. 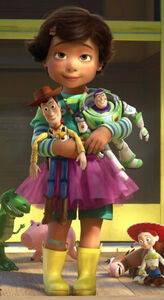 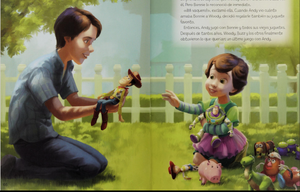 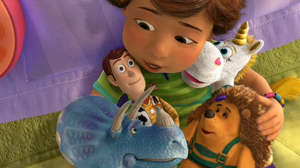