The Child (by Mr. Waternoose)
Kid
The Girl (by Roz)
Boomobile (Cars)

Her laughter, crying, and screams can cause power surges while she is in the Monster World.

Having fun with Sulley and Mike Wazowski.

To return to her room and meet with Sulley again.

To overcome her fear of Randall Boggs (all succeeded).

Mary Gibbs, better known by her nickname Boo, is the tritagonist of the 2001 Disney/Pixar film, Monsters, Inc.

She was voiced by Mary Gibbs.

In the film, Boo is a 2-year-old human child. She is presumably of Asian descent and speaks mostly in gibberish due to her age, who has escaped from her room from which Randall intended to kidnap her. Much of the film's plot follows what happens as Sulley and Mike try to get Boo back to safety. When she first appears, Boo is very attached to Sulley (calling him "Kitty"), but he is not so keen. But as the film progresses, he develops a bond with her. At one point, Sulley, under Mr. Waternoose's orders, roars in front of a child used for simulation, not noticing that he has also scared Boo. Sulley tries to apologize to Boo, but she is too terrified of him and runs to cower underneath Mr. Waternoose's legs. Having caught sight of Boo, Mr. Waternoose decides to take care of her before anything worse happens.

Mr. Waternoose sends for a door to return Boo home. However, it is revealed he has sent for a metal door, which Randall opens and allows Mr. Waternoose (who is revealed to be the one who ordered Randall to kidnap her) to push Sulley and Mike into it. Afterwards, Mr. Waternoose gives Boo to Randall, who proceeds with extracting screams from Boo by using the Scream Extractor. However, Mr. Waternoose regrets choosing Randall to aid him in his scheme and argues with Randall that because of him, he was forced to banish Sulley and Mike and saying that Sulley is twice the scarer Randall will ever be. Angered, Randall. However, Sulley arrives at the last moment to disable the device to free Boo. Mike catches up with them, and they rush back to Scare Floor F, with Randall in hot pursuit. Randall chases them to a large chamber where thousands of doors to the human world are kept. Sulley and Mike then make Boo laugh to activate the doors, then they go through them, exiting the monster world and entering back into it, in order to lose Randall and reach Boo's door. Just as it looks like Mike and Sulley have lost Randall, Boo suddenly slips off from Sulley's arms, and Randall reveals that he has caught her. Sulley manages to catch up with Boo, but then Randall ambushes Sulley.

Just as Randall is about to finish Sulley off, Boo manages to overcome her fear of monsters, especially Randall and suddenly jumps on him and beats him with a baseball bat. After Mike and Sulley banish him through another door (where he gets beaten up by hillbillies, they disable that door, and let it fall to the bottom of the chamber to ensure that he cannot return, Boo blows a raspberry directed at the shattered door. They open Boo's door, only to realize that the power has went out, but then, the door moves back to Scare Floor F, where Mr. Waternoose and the CDA agents are waiting. Mike runs off with Boo's monster costume as the agents go after him while Mr. Waternoose notices Sulley with Boo and her door and chases them to the simulation room, where he is lured into a trap set by Mike. Mike exposes Waternoose's plan to kidnap a thousand children and having Randall to assist him. With this incriminating evidence, the CDA turn on Mr. Waternoose and arrest him.

Immediately thereafter, Roz, revealed to be Agent 001 of the CDA, enters and decides that Boo's door is to be destroyed after she is safely returned to her room in order to ensure she will never return. Sulley takes her in to her room and tucks her in after she shows him her toys, including Jessie the Yodeling Cowgirl from Toy Story 2, a ball from Luxo, Jr., and Nemo from Finding Nemo. Boo and Sulley take a possibly one last look at each other, then after Sulley closes the door, Boo then opens it to possibly surprise him, only to find her closet instead and Sulley nowhere. After her door is shredded, Sulley feels sad that he will never see Boo again and keeps one of the splintered pieces from her door as a memento.

At the end of the film, Mike brings Sulley (now the new CEO of Monsters, a surprise, which turns out to be Boo's door reassembled. The door becomes functional when Sulley places the piece he has kept, and he opens it to see Boo, who (although off-screen) recognizes him by saying, "Kitty!". This gives Sulley a surprised grin on his face as the film closes. 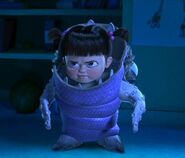 Boo looks like she's ready to save the world.