Boomer is a good-hearted troll in Skylanders: Spyro's Adventure.

He is voiced by Joey Camen who also voiced Terrafin and Free Ranger.

Unlike many trolls, Boomer only joined the Troll Armada just to blow things up. He wasn't really into conquering Skylands. He even saved a village from being flooded by his own kind. Because of this, Master Eon made him a Skylander, the only troll to have such an honor. 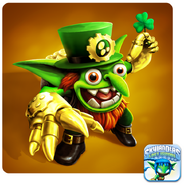