Boots is the deuteragonist of the show Dora the Explorer. He met Dora one day in the forest, and became her best friend. He is friendly and enthusiastic, and usually wears nothing but his beloved red boots, hence his name, Boots. He is blue with a yellow stomach. His parents look similar, with variations in eyes, height, clothing, and fur. Boots is present with Dora on most of her adventures, and he helps Dora to solve clues and puzzles. He also loves baseball and is on a team with Dora as shown in one episode. He loves to ride Rojo the fire truck.

He was voiced by Harrison Chad, Regan Mizrahi and Koda Gursoy. In the Japanese dub from the series, he was voiced by Nami Miyahara and Kei Kobayashi. 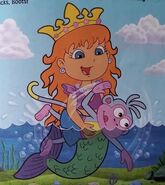 "Where do we go next Dora?" 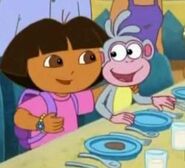 Add a photo to this gallery
Retrieved from "https://hero.fandom.com/wiki/Boots?oldid=2152786"
Community content is available under CC-BY-SA unless otherwise noted.