Captain of the White Tower

Save his people from complete doom.

Defend Gondor with his life (fulfilled).
Bring the One Ring to Gondor and use it against Sauron (failed).
Assist the other members of the Fellowship of the Ring (succeeded).
Ensure Frodo didn't take the One Ring to Sauron and convince him to deliver it to Gondor (failed).

He was once the captain of the guard of Minas Tirith. He was the son of Denethor, the Steward of Gondor and the older brother of Faramir, captain of the Ithilien Rangers. Like his father, he is "cursed" with Isildur's greed and is obsessed with the Ring. He believes that with the Ring in Gondor's possession, they could win the war against Sauron. He joins the fellowship so he could take the ring from Frodo and return it to Gondor, but becomes attached to his comrades. After failing to obtain it, he becomes guilty and pays for it. In a battle against Saruman's Uruk-Hai, he is pierced by three arrows and dies. He never believed that Aragorn was destined to be king but after Aragorn promised him that he will protect Gondor in his stead, Boromir learned to accept him. His primary weapons are a shield and sword and he carries a horn and blows it whenever he is in danger.

He was portrayed by actor Sean Bean, who is also known for having portrayed Eddard Stark from A Song of Fire and Ice.

Boromir was one of the many assembled at Elrond's council to discuss the fate of the ring. Though, secretly, he was sent to Rivendell by his father Denethor, to try to take the ring and bring it back to Gondor for their secret weapon. He arrives the night before and sees the blade that was broken, aka the sword of Isildur. He becomes fascinated by it but believes that using it again is foolish. At the council, when he first sees the ring, its lustful power grabs hold of Boromir but Gandalf has to speak the words of the ring to scare him off. He then explains that using the ring could work in their favor, and therefore, it should be used against Sauron. Aragorn tells him that it would be impossible and that man's greed over it would destroy Gondor. Boromir condescends Aragorn by asking him what would a ranger know? Legolas defends his friend and tells the council who Aragorn really is and that Boromir should owe him his allegiance. Boromir refuses and says that Gondor needs no king. Elrond continues saying that the ring must be destroyed in Mordor and that it must be taken there.

Boromir then goes on describing the horrors of Mordor and how this quest is folly. An argument among the council ensues and to break it up, Frodo Baggins volunteers to take it. Gandalf, Aragorn, Legolas and Gimli agree to guide him, and hoping to take it from Frodo, Boromir volunteers to go on as well. Along the journey, Boromir befriends Merry and Pippin and teaches them how to fight. When travelling over the pass of Caradhras, Frodo loses his balance and falls downhill. Aragorn helps him up, but he drops the ring and Boromir picks it up and could not stop looking at it. Aragorn sternly asks Boromir to return it and he does, but Aragorn begins to suspect him. After Saruman tries and fails to wipe them out with an avalanche, the fellowship travel through the mines of Moria. When they go in, Gimli sees several of his family dead and mourns to which Boromir comforts him. When they heard orcs approaching, they barricade the door and he, along with Aragorn and Legolas, stand by it ready to fight. They soon engaged in battle, but a cave troll bursts in and with its mallet, it hurls Boromir to the side and knocks him unconscious briefly. He wakes up and finds an orc ready to slay him, but Aragorn hurls his sword at the orc and saves Boromir's life. After they kill all the orcs and the troll, they try to escape, but end up being surrounded by thousands of orcs.

They all hear the Balrog bellowing in the distance and the orcs run away. They too run from the Balrog, but Gandalf stays behind to fight him and sacrifices himself. Boromir had to hold back Frodo and carry him out of Moria after the hobbit incredibly mourns over the wizards death. When they travel to Lothlorien and brought before Lady Galadriel, they Elf queen toys with Boromir's mind and show him dark premonitions. Later that night, he tells Aragorn of what she did and hopes that it does not come true. He describes the White City, Minas Tirith, and asks Aragorn if he has been there, to which Aragorn says he did many years ago.

Boromir promises him that the two will walk into the city as proud warriors and welcomed with open arms. Later, Frodo speaks with Galadriel and she tells him that someone in the fellowship will try to take the ring from Frodo, and he believes that it will be Boromir. The next day, after receiving cloaks and gifts from the elves, they are also given boats to travel via the river. After seeing Gollum still following them, Boromir fears that Gollum will expose their presence to Sauron and suggests that they go to Minas Tirith. Aragorn refuses and Boromir takes offense, saying that Aragorn has more faith in the elves than his own people. Boromir calls him a coward, and therefore, he is scared of what he may become, and he sternly tells Boromir that the ring will never be brought anywhere near the city.

The next day, they arrive at Amon Hen near the falls of Rauros and Frodo joins Boromir to gather wood. There, Boromir tries to take the ring. He explains that he needs to in order to save his people, but Frodo tries to stop him. Boromir becomes offended after being accused a thief and forcibly tries to attack Frodo. Frodo puts on the ring and escapes and kicks Boromir away. Boromir shouts out saying that Frodo will betray them and curses all halflings. He trips and begins feeling very guilty for what he did and breaks down and weeps. Shortly after, the fellowship are ambushed by Saruman's Uruk-hai and all engage in battle. Merry and Pippin lure the Uruks away so Frodo could escape, but they soon become surrounded and Boromir jumps in to save them. He and the two hobbits cut down many orcs and he blows his horn for help, which upon hearing, Aragorn rushes to his aid. Boromir cuts down several more but the Uruk leader, Lurtz, shoots an arrow from a distance and it hits Boromir. Boromir continues to fight and is pierced by another arrow. Even with two arrows in him, Boromir does not give up, but one more arrow hits him in the stomach and he finally falls. Merry and Pippin watch in horror and try to save him, but they are easily captured and taken away by the remaining Uruks while Lurtz is left to deal with Boromir.

Boromir could not move as Lurtz approaches him, points his bow at him and prepares to shoot him in the face. However, before he can, Aragorn jumps in and engages in battle with Lurtz. Lurtz severely beats him, but Aragorn stabs and decapitates him. He goes over to Boromir and tries to tend his wounds, but could not do anything as it was too late. He asks where Frodo was and Aragorn says that he let Frodo go and that they cannot do any more to help him for now. Boromir apologizes for betraying them and for failing to rescue the others. Aragorn tells him that he fought bravely, kept his honor and that he will die with it. Boromir then fears that with him dead now, no one can save Gondor and the world of Men will fall. Aragorn swears to him that as long as he lives, Gondor will not fail and that if the time should come, he will lead the people to victory. Boromir becomes touched with his words and takes his sword and puts it against his heart.

His final words were that he would have followed him to the end and calls him his king, having accepted the ranger's true calling and dies. Aragorn prays for him to be at peace and with Legolas and Gimli, they lay his body in a boat with his weapons and let him sail along the great river. 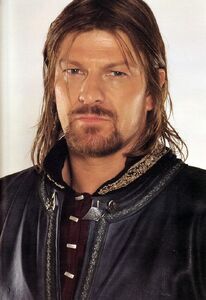 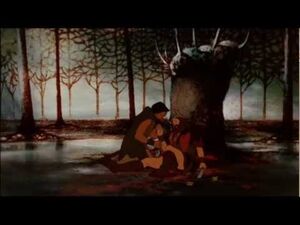 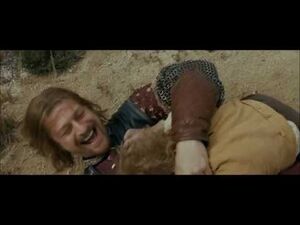 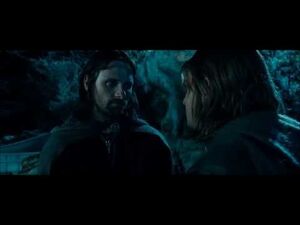 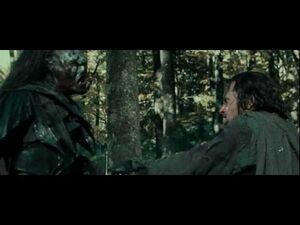 LOTR- The Fellowship of the Ring - The Death of Boromir 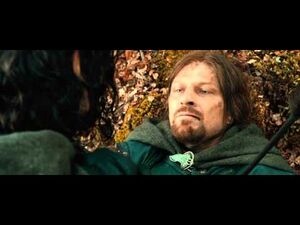 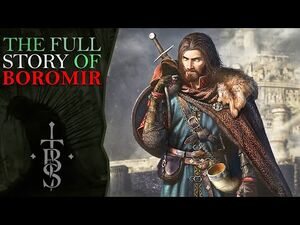