Member of the Order of Mata Nui

Capturing criminals and imprisoning them in the Pit

Botar is one of the protagonists that appeared in the BIONICLE series. He is also a member of the Order of Mata Nui as he was tasked of tracking down the criminals who opposed the will of the Great Spirit and bring them to the maximum security prison called The Pit, where they were to be imprisoned.

He was voiced by Scott McNeil, who also voiced as Onua and Graalok in the animated series.

Not much was known of Botar's past, though it was revealed that he came from the savage species, who were hailed from the Southern Islands. Later, he was confronted by the members of the Order of Mata Nui, who recruited him into the organization as he was given his primary duty which is to capture beings who had commited acts towards the Great Spirit as the Order deemed their acts unforgivable and banish them in the Pit, the prison that was located in the sourthern part of the Matoran Universe. He was also known to act as a courier, transporting items and other beings to their destinations of their locations.

Following the defeat of the League of Six Kingdoms at the hands of the Brotherhood of Makuta, the Order and the Toa Mangai; as the Barraki's execution was about to be carried out under the order of Makuta Teridax in the Coliseum in Metru Nui, Botar and several Maxilos robots appeared before Turaga Dume and halted Teridax's execution of the Barraki. After telling Dume of his intention of sending the Barraki into the Pit, the Turaga then allowed Botar and the Maxilos to take them into the Pit, thus opposing Teridax's will.

The Many Deaths of Toa Tuyet

Incredibly dedicated, Botar threatened anyone who impeded him with the same fate as his intended targets. His name was feared even within the Order of Mata Nui, for his job was to retrieve defeated enemies—traitors to the Order and those beyond all redemption and banish them to the Pit.

Besides teleportation, Botar's powers were unknown. He was unaffected by the Pit's mutagen because he only stayed for a split-second, not staying long enough to get wet. Like all Order members, Botar's mind was shielded from intrusion. 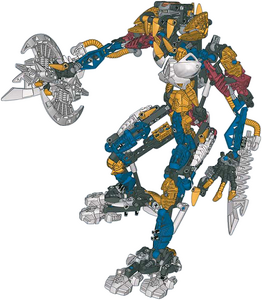 Botar in a set form. 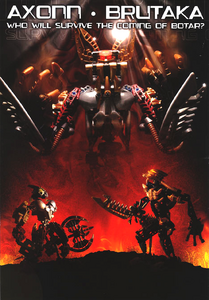 Botar appears before Axonn and Brutaka in the poster.
Add a photo to this gallery

Retrieved from "https://hero.fandom.com/wiki/Botar?oldid=1777691"
Community content is available under CC-BY-SA unless otherwise noted.