The Boukengers are a Sentai team based in the SGS offices, that search for the 'Precious', items deemed even more valuable than esteemed treasure. They are aided by Zubaan.

The Search Guard Successor Foundation (SGS) is a global, non-governmental organization set up throughout the world for the searching, obtaining and maintenance of Precious, mysterious objects of massive power from the civilizations and societies of the past. However this is a task of great danger and difficulty: the obstacles for the obtaining the Precious are many and difficult, compounded with many of these objects possessing great danger just to be collected. Further complicating the matter are those who wish to gain the Precious themselves for their own wicked, evil purpose; these organizations are collectively known as the Negative Syndicates.

In order to combat the Negatives and safely obtain Precious even with the dangers they possess, SGS developed various advanced technology for usage in the field. Most of this technology is linked in truth to ancient studies by Renaissance scientist Leon Giordana, who had created blue prints and concepts that were centuries ahead of his time. The most important technology that Giordana theorized was that of the "Parallel Engine", a powerful machine that both allowed for powering vehicles but, more importantly, can be linked up to a human to allow for them to use the power of the vehicle for combat and survival.Task 11: The Showdown on the Isolated Island With the power of this engine alongside special suits for the usage of it's power, it's user can obtain enhanced strength and durability for Precious missions and face against those who used them for evil or selfish reasons.

Yet with the technology for the mission, it is the hearts of the people performing the missions that are the true soul of SGS. Five special people notable for their skills and abilities for handling difficult missions and surviving any odds were recruited to accomplish the Precious hunts. Empowered by the Parallel Engines of five vehicles, they have come together under the name of the "Boukenger". These five are:

In Gokaiger, Years later, the Space Empire Zangyack invaded Earth. This threat was so great that all of the first 34 Super Sentai, including the Boukengers, were needed to oppose them. The 34 Sentai put up a valiant fight against the ground forces, but when the Zangyack fleet itself attacked them, Akarenger told everyone to combine their powers and save the Earth. This destroyed the Zangyack fleet and resulted in the loss of their powers, which resurfaced as Ranger Keys, that were dispersed throughout the universe. In the immediate aftermath of the battle, Satoru, alongside Saki Rouyama (Go-On Yellow) of the Go-ongers, informed the Goseigers that they destroyed the Zangyack's first invasion.

The keys were collected by AkaRed, and later utilized by the 35th Super Sentai, the Gokaigers, a group of five people from different planets who came to Earth in search of the Greatest Treasure in the Universe. Ep. 1: The Space Pirates Appear During the battle against the Black Cross King, Satoru was one of several Super Sentai warriors who granted their greater powers to the Gokaigers. Gokaiger Goseiger Super Sentai 199 Hero Great Battle Later, Satoru later visited the GokaiGalleon, asking for the Gokaigers aid in retrieving the Heart of Hades, a powerful Precious. In the adventure that followed, Satoru encountered the revived King Ryuuwon, who was defeated by the Gokaigers. Ep. 21: The Adventurer Heart

After the Gokaigers finally defeated Zangyack, they returned the Ranger Keys before they left Earth to find the second Greatest Treasure in the Universe. It is assumed the Boukengers have their powers back. Final Ep.: Farewell Space Pirates

In Super Hero Taisen Z, The five-man Boukenger team was part of a force of Sentai and Rider reinforcements led by Akarenger and Kamen Rider #1Icon-crosswiki that came to assist the Sentai and Riders of recent years who were overwhelmed by the revived monster army of the Space Crime Syndicate MadouIcon-crosswiki. The combined forces of superheroes were able to turn the tide against the Madou army. They lined up and used their various finisher attacks to destroy the revived monsters.

After Demon King PsychoIcon-crosswiki was destroyed and the battle was finally over, the Boukengers appeared standing on a cliff with all the other heroes who appeared to help, to say goodbye to the heroes of recent years before taking their leave. Kamen Rider × Super Sentai × Space Sheriff: Super Hero Taisen Z 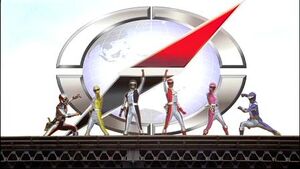 Retrieved from "https://hero.fandom.com/wiki/Boukengers?oldid=1835662"
Community content is available under CC-BY-SA unless otherwise noted.