Bouncer is a large robot in Skylanders: Giants. He is voiced by Bumper Robinson who also voiced Rook Blonko from Ben 10: Omniverse.

Long ago, Bouncer was an All-Star Roboto Ball player. His big, lively personality helped popularize the sport, but after taking too many hits to the head, he retired and the sport faded away. Bouncer then became a security-bot in the Crystal Mines. It was there he encountered dozens of Mabu from his Roboto Ball fan club that had been enslaved by the Arkeyans. Not wanting to let his fans down, Bouncer came out of retirement and began shooting at a new goal – defeating the Arkeyan King. Soon after he teamed up with other Giants, and together they became the first Skylanders. 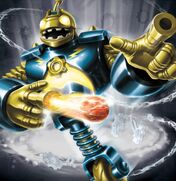