Start a Wiki
Bouncing Boy is a fictional character in the DC Comics Universe, a member of the Legion of Super-Heroes in the 30th century. He is Chuck Taine of Earth, and he has the power to inflate like a ball and bounce.

He received his powers when he accidentally drank a super plastic formula which he thought was soda pop. He first appeared in Action Comics #276 (May 1961).

He married fellow Legionnaire Duo Damsel in Superboy #200 and then left active service as a Legionnaire to become a Legion reservist, appearing only sporadically thereafter until Zero Hour. During his period as reservist, he and Duo Damsel were also in charge of training recruits to the Legion's Academy.

In the post Zero Hour reboot continuity, he was Charles Foster Taine (Chuck for short) who was the Legion's resident architect and engineer. He has not received bouncing powers in this continuity and was only an honorary member of the Legion. As a maintenance man, he once built a specialty vehicle called the "Bouncing Boy" which acted as a bouncing juggernaut, smashing anything in its way.

The name "Charles Foster Taine" is a reference to the classic 1941 feature film, Citizen Kane and its title character, Charles Foster Kane, though in his initial appearance he is simply named "Chuck Taine".

He has yet to appear in the "Threeboot" version of the Legion, which began in 2004.

The Post-Infinite Crisis version of Bouncing Boy appeared in Final Crisis: Legion of 3 Worlds. Missing in action during most of the miniseries, he and his wife, now known as Duplicate Damsel, finally show up in the final issue to help end the battle against the antagonists and then rejoin the Legion.

Bouncing Boy has the ability to expand his body to form that of a spherical ball of sorts. In his normal form, he is overweight to a medium degree, but when he "inflates", while his mass and height remain the same, his overall dimensions increase to resemble that of a human sized ball. Whether his body actually inflates, as in takes in air, or his individual cells expand, decreasing his overall density while increasing his overall dimensions is not known. Also, when he utilizes his power, his body's elasticity and resiliency becomes extremely rubbery allowing him to bounce with great force. Originally thought of as a useless power by his Legionnaire peers, he has adeptly demonstrated many times how he can use his body's shape and rubber-like consistency as an effective ballistic weapon. His "go-to" move is to use surrounding walls to ricochet back and forth and bowling over his opponents as he does. Normally, an inanimate rubber ball will slowly lose its kinetic force due to friction, gravity and bouncing off surrounding objects or walls, but Bouncing Boy can use his own muscles to maintain his velocity and power as he bounces about. His power also allows him a limited degree of invulnerability since bouncing off walls and nearby objects have yet to injure him as they would a normal human. He is also invulnerable to electric shock while in his inflated state.

As a member of the of the Legion of Super-Heroes he is provided a Legion Flight Ring. It allows him to fly and protects him from the vacuum of space and other dangerous environments.

Bouncing Boy appeared in the 2006 episode of Justice League Unlimited "Far From Home," featuring the Legion of Super-Heroes. He was voiced by Googy Gress.

Bouncing Boy is part of the core team in the Legion of Super-Heroes animated series, appearing Saturday mornings on The CW; he is voiced by Michael Cornacchia. In the series, Bouncing Boy is presented as an accepted member of the team, and the main pilot of the Legion Cruiser. In the episode "Timber Wolf," he and Brainiac Five quarrel over Bouncing Boy's piloting and engineering, but in the end, Bouncing Boy proves his abilities to his teammate.

In the episode "Lightning Storm", Bouncing Boy is seen working with potential Legion applicants, helping them prepare for the upcoming Legion auditions. In the same episode, his quick thinking helps him in the battle against the Lightspeed Vanguard. This led into the following episode, "Substitutes", in which Bouncing Boy gave encouragement to the future Legion of Substitute Heroes, where it was revealed that he himself tried out for the Legion four times before being accepted. In the end, he ends up coining the fledgeling group's name.

Ultimately, in the episode "Chain of Command", Bouncing Boy's quick thinking and observation allows him to form a plan that is crucial to the Legion's trying to save the inhabitants of the planet Winath. At the end of the episode, after Lightning Lad challenged Cosmic Boy for leadership of the Legion and prompted an election, an upset occurred - with the Legion instead electing Bouncing Boy to the position. After being elected Bouncing Boy receives a kiss from Triplicate Girl, in the end they are seen holding hands. He is seen taking an active leadership role in the 2-part episode "Sundown".

In the second season, his new position as leader is for the most part ignored, as Lightning Lad and Cosmic Boy are still arguing about it. No canon explanation is given. 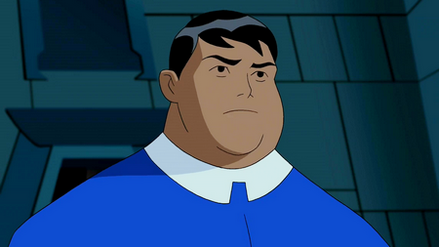 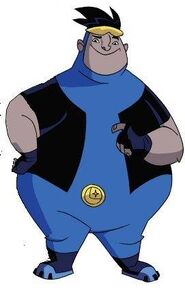 Bouncing Boy in Legion of Super-Heroes 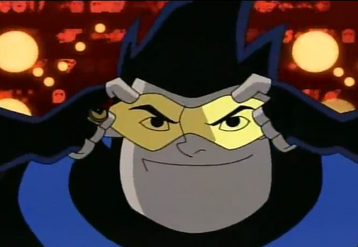 Add a photo to this gallery
Retrieved from "https://hero.fandom.com/wiki/Bouncing_Boy?oldid=1695036"
Community content is available under CC-BY-SA unless otherwise noted.