Looking after and taking care of his crew and his pigeons, gathering information and sending information, defying rules and orders to let others know he is free independent man

Bowery King is a side character in John Wick 2 and 3 and seem will be a major ally in John Wick 4. He is the head of the bowery an underworld intelligent network disguised to look like a homeless shelter.

He was portrayed by Laurence Fishburne, who also portrayed Morpheus in The Matrix trilogy and Bill Foster in Ant-Man and the Wasp.

Much like many characters in the John Wick series there isn't much information about the Bowery King's past. At some point when he first saw John Wick the Bowery King was a target for John to kill. Wick cut him two times and gave him a choice to keep pressure on his cut and live or the try to shot him and then bleed ou and die. After that the Bowery King never let anyone else sneak up on him again and went from a pawn to a king.

At some point he formed his own group and took over a homeless shelter as his hideout. He recruited beggars as the eyes and ears of the streets, allies of the city. He trained pigeons as massagers he created a large network across New York with out the internet. No internet makes the Bowery King and his crew anonymous and untraceable.

When he didn't resignation, he got sliced 7 times and almost die. In the end of Parabellum, he met John Wick who is injured after got shoot by Winston and fell of the roof. Bowery King said he is very angry at The High Table and he will stand up and fight. He asked John does he feel like him and John agree. 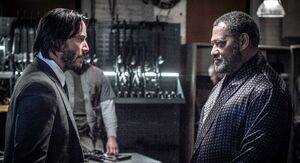 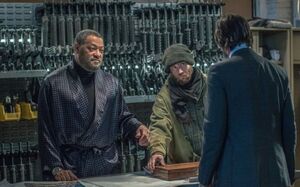 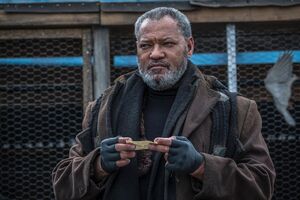 Bowery King in John Wick: Chapter 3
Add a photo to this gallery

Retrieved from "https://hero.fandom.com/wiki/Bowery_King?oldid=1981260"
Community content is available under CC-BY-SA unless otherwise noted.