Br'er Rabbit is a comical character who first appeared as the main deuteragonist in the controversial Disney's 1946 film Song of the South, which inspired the Disney theme park attraction Splash Mountain as the main protagonist, where he is also featured.

He was voiced by Johnny Lee in the first two animated segments of the film and James Baskett (who played Uncle Remus and The Butterfly) in the last segment. Jess Harnell took over the role in 1989.

Like Br'er Fox and Br'er Bear, Br'er Rabbit speaks in a Deep South accent, complete with much of their dialect and quirks of speech, and wears stereotypical lower-class African-American clothing of the time. He is portrayed as being something of a scallywag and is not quite as clever as he thinks he is, which, along with his arrogance and being overconfident, is the reason for him getting trapped in the first place - but he's still quite smart enough to outwit Br'er Fox and Br'er Bear. 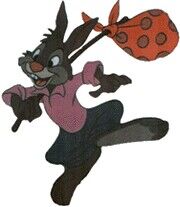