The Brainbots are some of Megamind's helpers and the pentagonists of the film of the same name. They resemble jellyfish.

They have special abilities such as light display and flight. Megamind uses them instead of Minion because Minion thinks Megamind is in love with Roxanne Ritchi so he left him.They would later aid Megamind into saving Roxanne and Metro City from the threat of Tighten, to which Megamind manages to defeat. They are seen near the end of the film repairing the damages caused in Metro City as ordered by Megamind, who finally revels in becoming a real hero. 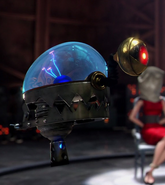 Tiny Brainbot
Add a photo to this gallery
Retrieved from "https://hero.fandom.com/wiki/Brainbots?oldid=1963975"
Community content is available under CC-BY-SA unless otherwise noted.