Brainiac 5 (real name Qurel Dox) is a fictional superhero in DC comics and its universe, and is a member of the Legion of Super-Heroes in the 30th Century. Born on the planet Colu, Dox is a twelfth-level intelligent being and is the descendant of one of Superman's greatest foe's, Brainiac. Joining the Legion of Super-Heroes, Brainiac 5 decides to become a superhero to stop threats, and also atone for his ancestor's evil deeds.

He was created by Jerry Siegel and Jimy Mooney, and first appeared in Action Comics # 276 in May of 1961.

Qurel Dox is the son of Kajz Dox and unnamed mother, and was born on the planet Colu where their race had the the intellect level of ten. However, Qurel was born with the intellect level twelve, something he inherited from his ancestor Brainiac and his son, Vril Dox II. The title "Brainiac" fell into notoriety after his ancestor Lyrl Dox, but Kajz decided to pick up the mantle and named himself "Brainiac 4". Kajz died and Qurel was orphaned as a child at the age of twelve, and he took the title of "Brainiac 5".

When Brainiac 5 was using a Time Viewer to see the dawn of time, the Green Lantern Corps attacked him before he was rescued by the Legion of Super Heroes. Impressed by the team, Brainiac 5 tried out and joined the Legion alongside Supergirl, and developed a crush on her. Brainiac 5 later went on to invent the Legion Flight Ring with the Invisible Kid by using an isotope he discovered with Mon-El, and also invented the Time Bubble. In addition, Brainiac 5 befriended Rond Vidar, a fellow genius and Green Lantern.

During his time with the team, he started to show signs of mental instability, the firs signs appeared when he became the Legion's leader. He invented Computo, which rebelled against Brainiac 5 and caused much trouble, including causing the death of one of Triplicate Girl's bodies. Also, Brainiac 5 also missed Supergirl when she was gone, and missed her so badly that he created a Supergirl android in his sleep and programmed her to love him. The android attacked them both, but Kara managed to stop it.

Eventually, Brainiac 5 was targeted by Pulsar Stargrave, who pretended to be his long-lost father. It was later revealed that Pulsar believed himself to be Brainiac 5's ancestor, Vril Dox, and wanted to resurrect the Computer Tyrants and throw the Coluan's back into slavery. Pulsar drove Brainiac 5 insane, which led him to frame his teammate and tried Ultra Boy for the murder of An Ryd. However, Chameleon Boy discovered that it was Pulsar and helped Ultra Boy be exonerated for the crime.

After sometime, Brainiac 5 had gone truly insane and he accidentally transformed Professor Jaxon Rugarth into Infinite Man. Then he later used the Controllers' Miracle Machine to create Omega, and the Legion called in Matter-Eater Lad to stop Omega, but at the cost of his own santiy. Following this, Brainiac 5 and Matter-Eater Lad taken to psychiatric care, but Brainiac 5 was later released but not welcomed back into the Legion. Brainiac 5 later led the Legion of Substitute Heroes against the League of Super-Assassins, and later had his mind purged of past childhood trauma by Saturn Girl. He later committed himself to curing Matter-Eater Lad's insanity, and the two rejoined the Legion.

When Darkseid began his uprising, Brainiac 5 worked hard to support the Legion to stop him. After the final battle, he told Supergirl he was finally over his crush on her, but Kara remarked that she was beginning to notice how cute he was. Realizing that Kara had started to like him back, Brainiac 5 cursed himself for his lousy timing. The team decided to celebrate their victory over stopping Darkseid, Brainiac 5, Supergirl, Colossal Boy and Chameleon Girl were flying by Weber's World when they were struck by a squad of Science Police led by Ontiir.

Although Ontiir claimed they had been victims of a security patrol that went wrong, the team felt compelled to check out the place. It was revealed that Emerald Empress had taken over Weber's World as part of her plan to take over the galaxy, and the team had fell for her trap. Managing to break out, Brainiac 5 and Supergirl thwarted Emerald Empress' plan, and later handled Saray's henchmen.

Brainiac 5 later rescued a young girl named Danielle Foccart when she was possessed by Computo, whom he also defeated once again. He later attended Karate Kid and Princess Projectra's wedding, and chased Ontiir down when he escaped his trial. Around this time, Brainiac 5 and Supergirl's interest in each other increased, but after a mission went awry, Supergirl decided to return to the 20th Century.

Brainiac 5 is generally portrayed as a green humanoid with blonde hair and purple clothing. The build varies slightly from muscular to a more slender build with some versions having three dots that form an upside down triangle while others lack them. 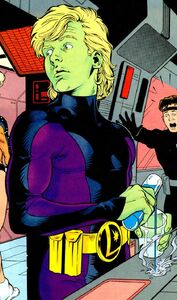 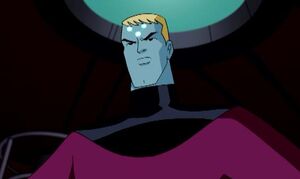 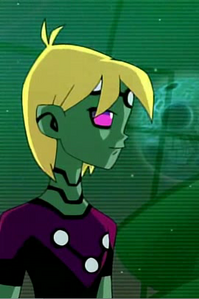 Brainiac 5 in Legion of Super Heroes. 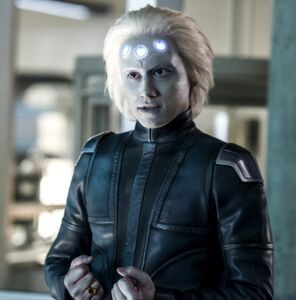 Brainiac 5 in the Arrowverse.
Add a photo to this gallery

Retrieved from "https://hero.fandom.com/wiki/Brainiac_5_(DC)?oldid=1953792"
Community content is available under CC-BY-SA unless otherwise noted.